Shrimp Foil Packets have jumbo shrimp, sausage, corn and potatoes seasoned and wrapped in foil. It’s a mouthwatering shrimp boil in foil that makes it easy to grill or bake. These shrimp boil foil packets make a fun foil packet meal for any summertime party or BBQ!

When the weather’s hot we don’t always feel like going through the preparation for a shrimp boil. Instead we’ll make these shrimp boil packets, which deliver the same delicious flavors in convenient individual servings your family and friends will love.

You’ll rarely find this home-cooked comfort food in a restaurant! It’s simply one of the best ways to make shrimp on the grill in foil, and there’s minimal cleanup to boot!

The best part? You can make them ahead of time and grill foil packets when everyone arrives. If the weather isn’t cooperating, make a shrimp foil bake instead by placing shrimp foil packets in the oven. 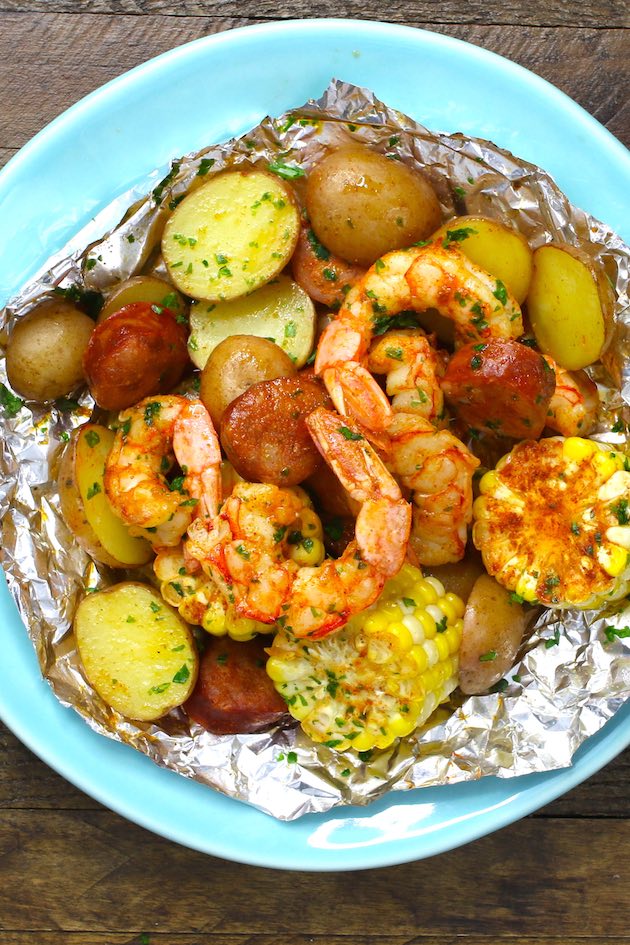 HOW TO MAKE SHRIMP FOIL PACKETS

You only need 5 ingredients plus some olive oil to make grilled shrimp foil packets:

The trick is that the shrimp cooks quickly, while the potatoes cook slowly. So it’s best to boil your potato chunks and corn for 5 minutes before adding to the shrimp packets. Then everything will cook in just 15 minutes for a quick meal.

To make the packets, cut four 12-inch (30 cm) square pieces of foil, shiny side facing up. Evenly distribute the ingredients across the middle of each piece.

Fold up the edges to seal each packet, taking care not to puncture the foil, lest the juices leak out during cooking. Using heavy-duty foil will also help to prevent this.

There are two ways to cook them:

It’s best to carry them back and forth on a tray, as they’re amazingly easy to drop!

To serve up a foil packet dinner, carefully place it on a plate and unfold the edges to open up. Sprinkle some fresh lemon juice, salt and pepper for extra flavor along with minced parlsey for an attractive look. 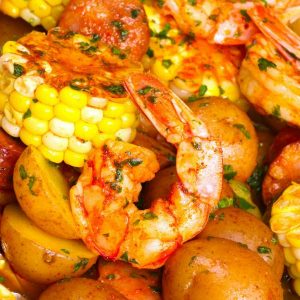 Print Save RecipeView Saved Recipes
3.96 from 43 votes
Leave a review »