Shrimp Boil is an easy and flavorful southern feast to feed a crowd! Shrimp is boiled with potatoes, corn, smoked sausage, onion and seasonings. This one-pot meal is as good for a party as a casual weeknight dinner that’ll be on your table in under 30 minutes! 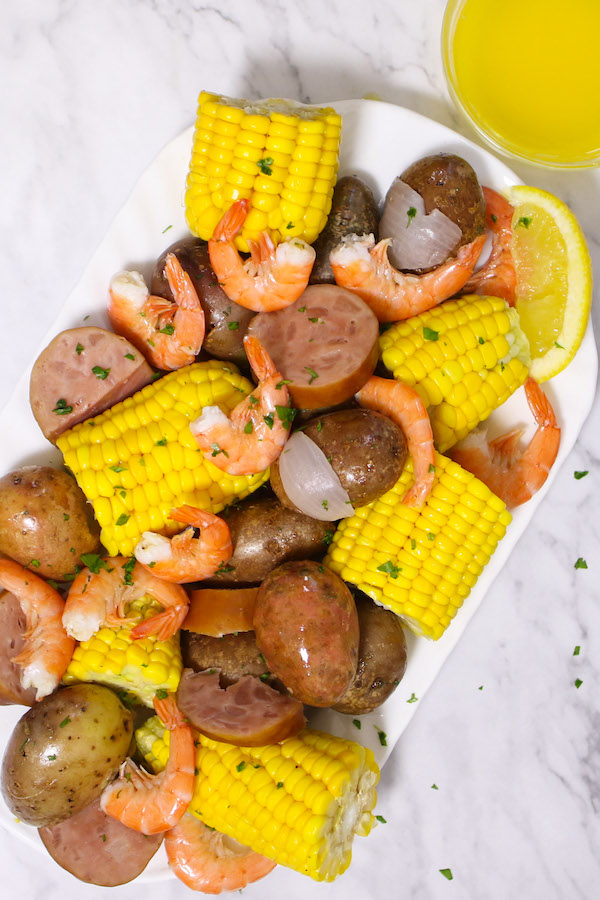 If you love shrimp as I do, then a good shrimp boil is a must-try recipe that’s easy to make. Definitely one of my go-to seafood recipes to make year-round along with crab legs. To make a complete southern menu, follow it with strawberry pretzel salad or lemon meringue pie for dessert!

WHAT IS SHRIMP BOIL?

Shrimp Boil, also called a southern boil or low country boil, has its origins in Louisiana. When seafood trawlers would bring in their catch, people would gather with large pots to celebrate and feast with lots of music! Copious quantities of shrimp and crawfish would be boiled with potatoes, corn on the cob, smoked sausage and Cajun spices.

A shrimp boil, also called a southern boil or low country boil, is served outdoors on picnic tables covered with newspaper. You eat the shrimp and corn with your fingers surrounded by friends and family and quite possibly a parade nearby! It’s one of the best things you can eat, but until you can visit the Gulf coast you’ll have to make this one yourself!

There are lots of ways to enjoy shrimp boil flavors without boiling, including our popular shrimp boil foil packets that are baked or grilled. 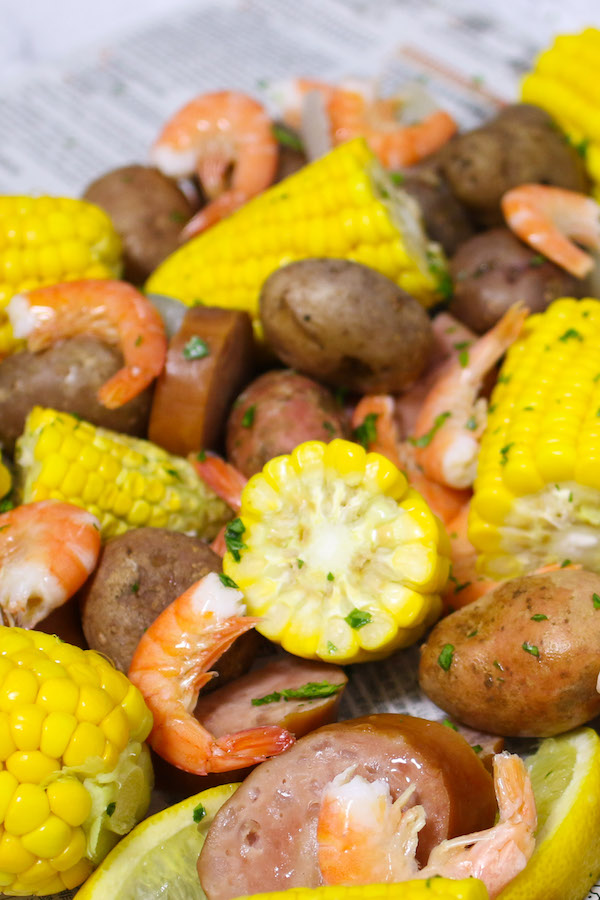 WHAT ARE THE INGREDIENTS IN A SHRIMP BOIL?

While there are many variations of shrimp boil, the basic ingredients are:

I recommend selecting shrimp with shells on to retain flavor during cooking and deveined if possible. Large size (26-35 range – see our guide to shrimp sizes) is ideal although you can go smaller or larger if that’s all you can find. Frozen shrimp should be thawed beforehand and here are tips to thaw shrimp fast.

The Zatarain’s seasoning consists of whole spices in a bag that you drop into the pot, and the boiling water extracts the flavors and infuses them into the other ingredients. Each 1.5 oz bag has enough for up to 4 pounds of shrimp, and you just toss the bag for easy cleanup at the end. If you need to make your own, you’ll need mustard seeds, coriander seeds, dill seed, allspice berries, bay leaves and cayenne. Proportions for the above ingredients are listed in the recipe notes. 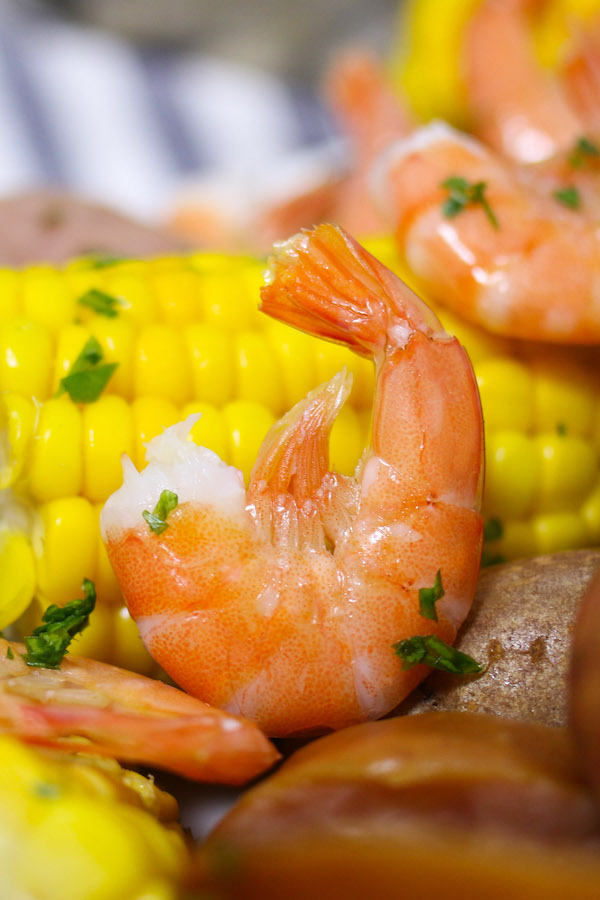 HOW MUCH SHRIMP PER PERSON SHOULD I BUY?

You want to count between 1/3-1/2 pound of shrimp (150-200 grams) per person depending on appetites. Remember the shrimp shrink slightly during boiling, so you may want to buy a bit extra just in case:

HOW TO SERVE SHRIMP BOIL

Everyone has their preferred way to serve a shrimp boil. Here are some of the most popular ways:

Shrimp boil is also best served with French bread on the side as well as melted butter, fresh lemon and hot sauce as condiments.

This dish is quite versatile and you can easily customize it to suit your taste: 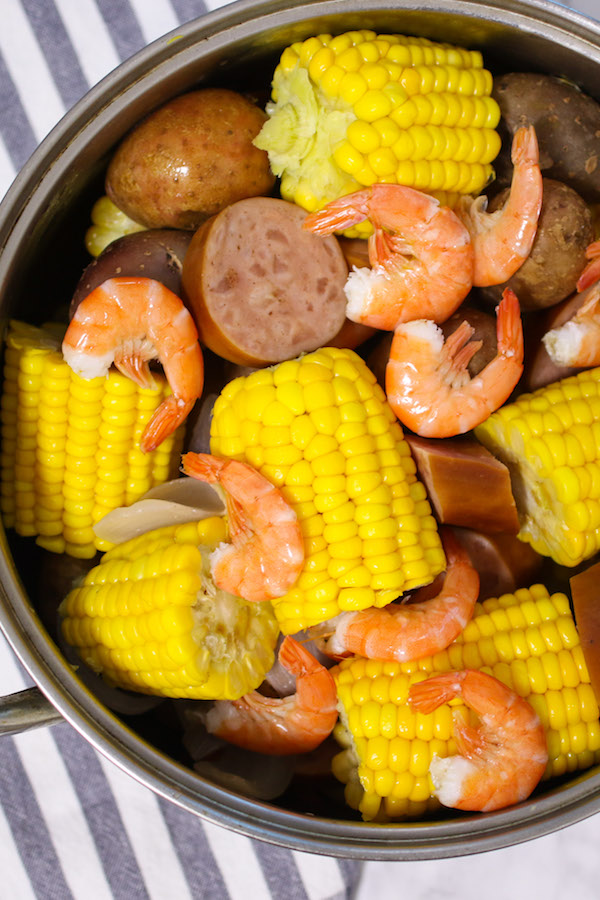 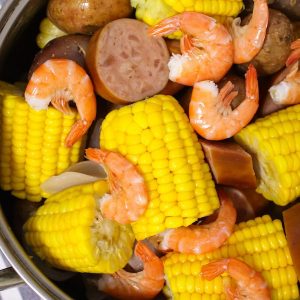