How Long to Cook Bacon in the Oven

Learn how long to cook bacon in the oven at any temperature including 400, 350 and 375 degrees. Whether you’ve got regular or thick cut, you can make crispy bacon easily by using a parchment-lined pan with or without a rack. It’s the BEST way to feed a crowd!

Whether you’re cooking breakfast or preparing an elaborate main course, there’s nothing better than crispy oven baked bacon! However, there are some tips and tricks to get the best results, and it’s especially important to know how long to cook bacon in the oven. So friends, let’s get started!

You may wonder: why do you cook bacon in the oven?

Oh, and then there’s the taste. Oven baked bacon is delicious when done right!

The good news is that you can cook any kind of bacon in the oven, including regular bacon, thick-cut bacon or turkey bacon.

You can also make bacon-wrapped vegetables such as asparagus or these Brussel sprouts. So good!

How Long Do You Bake Bacon

Cooking time depends on the oven temperature and what kind of bacon you’re cooking! In addition, for crispy bacon, use the long end of the time ranges above and consider using a wire rack too.

For chewy bacon, use the short end of the range.  Remember that bacon will crispen a bit more as it cools.

Note that each oven is different, so actual times may vary. For example, a less efficient oven will take a few minutes longer, while a convection or forced air oven will be faster.

What’s the Best Temperature to Bake Bacon in the Oven?

The best temperature for bacon is 400°F in most cases. The few exceptions are turkey bacon and pre-cooked bacon that should be cooked at 350°F or according to the package directions.

If you’re not confident your oven temperature is accurate, then use an inexpensive oven thermometer to ensure the best results.

How to Cook Bacon in the Oven

1. Grab a rimmed baking sheet and line with either parchment or foil, leaving enough to cover a half-inch up the edges so the grease won’t spill over. If you want crispier bacon, then place a wire cooling rack into the pack and spritz a few times with a nonstick cooking spray (or olive oil spray).

2. Lay the bacon strips in a single layer in the pan or rack. Then place in the oven and set it to 400°F or the temperature you are using. It may seem strange to put it in a cool oven, but the fat will render better that way for even cooking with less curling!

3. Bake according to the times above or until it’s golden and has reached your desired crispness. Note there is no need to flip the bacon!

4. While it’s cooking, you can line a plate with a double layer of paper towel. Remove the bacon from the oven and transfer to the prepared plate. Dab with paper towel to remove excess fat as desired before serving.

Pro Tips for Baking Bacon in the Oven

Cooking Bacon in the Oven without a Rack

Using a rack is optional and strictly a matter of personal preference. I find the air circulation beneath the rack makes it slightly easier to get crispy bacon, but you can put the bacon directly in the pan too. Just line it with parchment or foil for easy cleanup.

Do I Need to Flip the Bacon?

No, you do not need to flip the bacon unless it’s thick-cut. One of the benefits of the oven is even heat distribution, which will cook the bacon thoroughly without flipping.

How to Make it Extra Crispy?

Rubbery bacon is usually a result of excess heat, meaning the fat doesn’t render properly before the meat is done, leading to a chewy texture.

For extra crispy bacon, it’s best to heat gradually. That means putting the bacon in a cool or warming oven instead of one that is fully preheated. Also, make sure it’s in a single layer, as crowding the pan will lead to less crispy bacon.

What to Do With the Bacon Grease?

Don’t throw out the fat! You can save bacon grease for use as a substitute for butter or oil. I love to add a spoonful to potatoes before roasting for extra flavor. Some people also use it to make candles, lip balm and other DIY creations!

Simply pour the grease into a mason jar, cover and store in the fridge for up to 3 months.

What to Serve with Oven Baked Bacon?

Oven baked bacon goes perfectly with eggs, toast, pancakes, French toast and so many more breakfast and brunch ideas. The possibilities are endless!

View all recipes with bacon 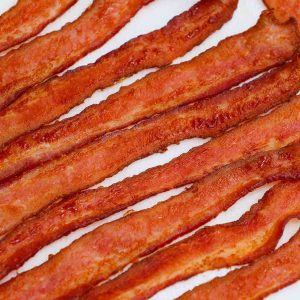 How to Cook Bacon in Oven

Author: Cindy
Course: Breakfast
Cuisine: American
Keyword: How Long to Bake Bacon, How to Bake Bacon, Oven Baked Bacon
Did you make this recipe? Leave a comment below!