How Long to Cook Ribs in the Oven

Learn how long to cook ribs in the oven at 350 or any other temperature to get tender and juicy results. We cover how long to bake back ribs as well as spare ribs and country-style ribs, as they all cook up a bit differently. 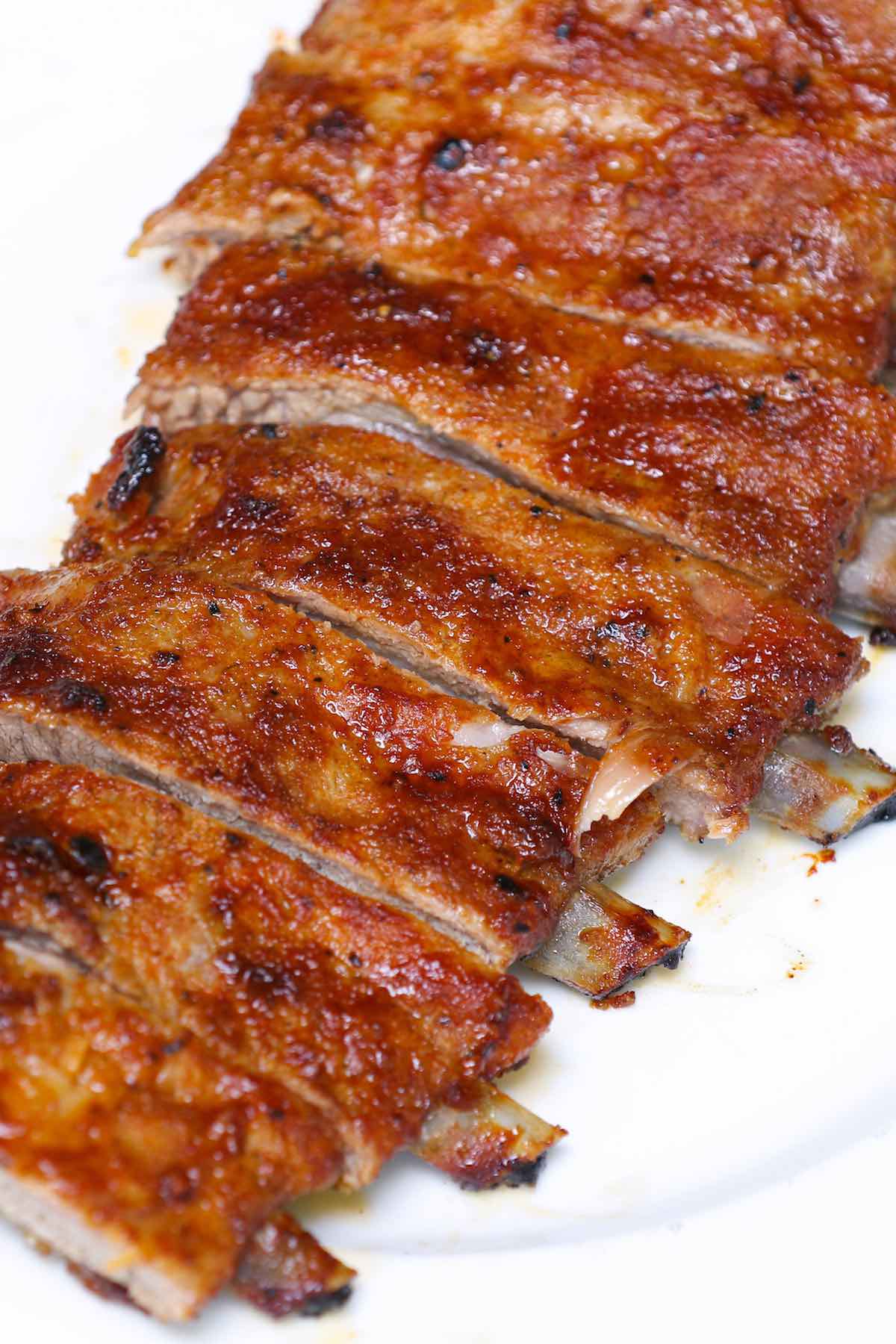 Pork ribs are delicious and fairly easy to cook in the oven. Plus, many of us have out favorite recipes.

There are three main types of pork ribs. Here’s how they stack up and how quickly they cook: 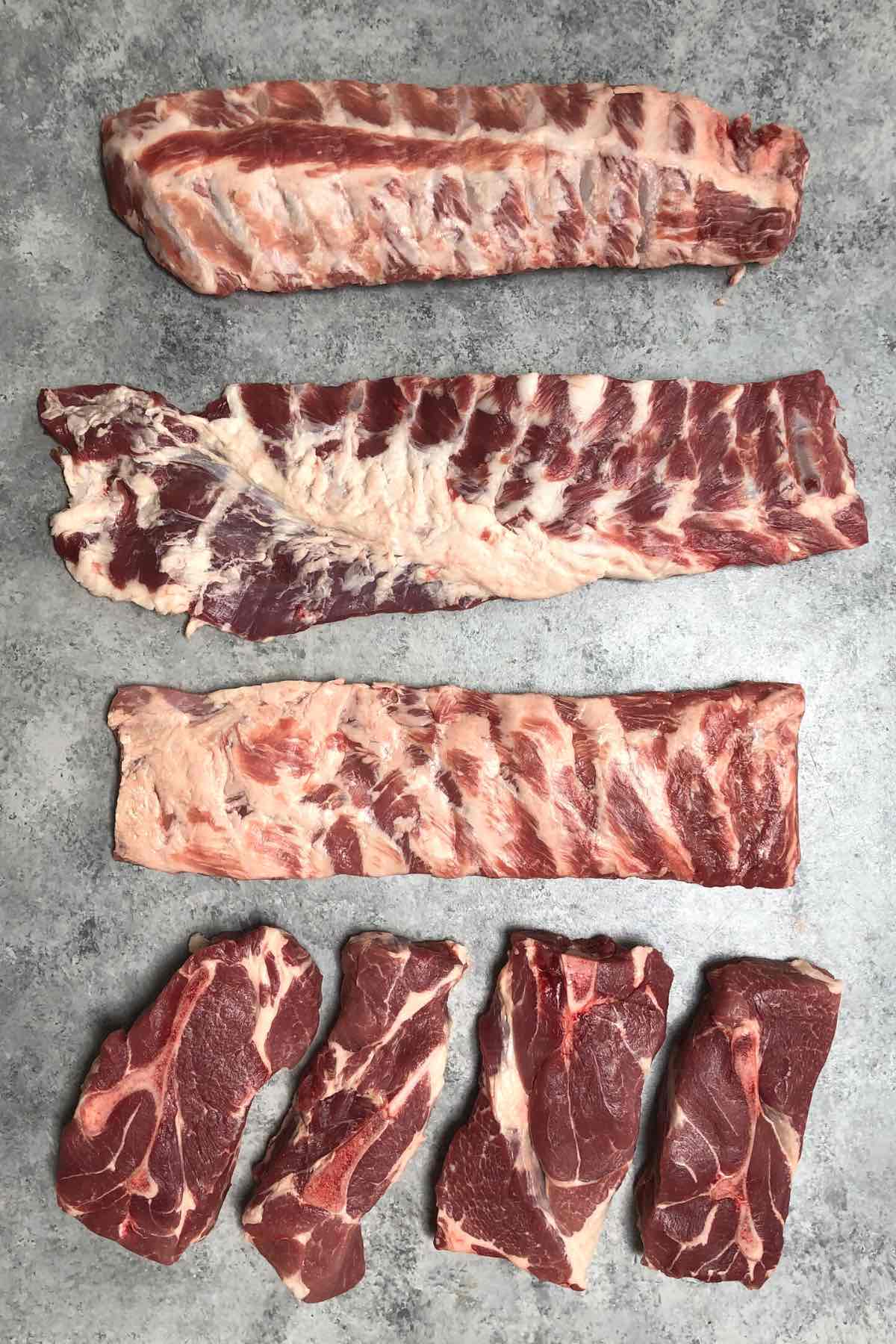 How Long Do You Cook Ribs in the Oven

How long you cook ribs in the oven depends mainly on the oven temperature as well as the type of pork ribs. Here’s a chart of approximate baking times:

Removing the ribs from the refrigerator an hour ahead of time will speed up cooking slightly by promoting more even heat distribution. In addition, using your oven’s convection or forced air feature can accelerate cooking by up to 30%.

Given all these factors, it’s always best to check doneness rather than rely on cooking time alone! 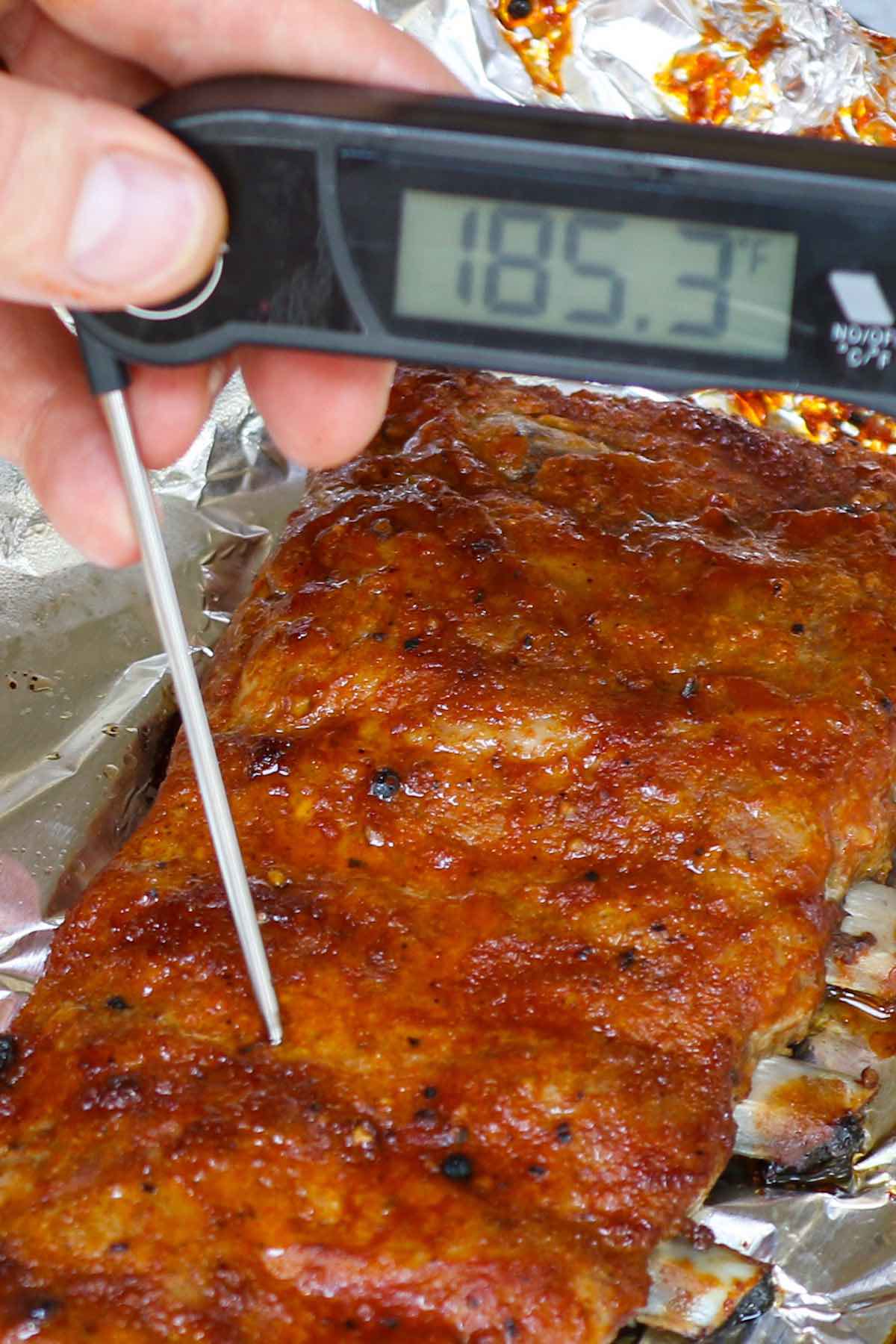 When Are Ribs Done?

Ribs are usually done when the bones stick out a ½-inch from the meat. However, that’s not 100% dependable since they’ll also do that when overcooked! The best method is still to insert an instant-read thermometer into the thickest section without touching the bone:

The USDA says ribs are safe to eat at 145°F. At the same time, the collagen and connective tissue does not start breaking down until 165°F so most people keep cooking ribs longer to get them nice and juicy.

How to Bake Ribs

Remove the membrane: Before preparing the ribs, you want to remove the silverskin membrane from the underside, as it’s tough and blocks the seasonings from penetrating into the meat. Slide a sharp knife underneath to start separating it. Then grip it with a piece of paper towel and rip the rest of it off. 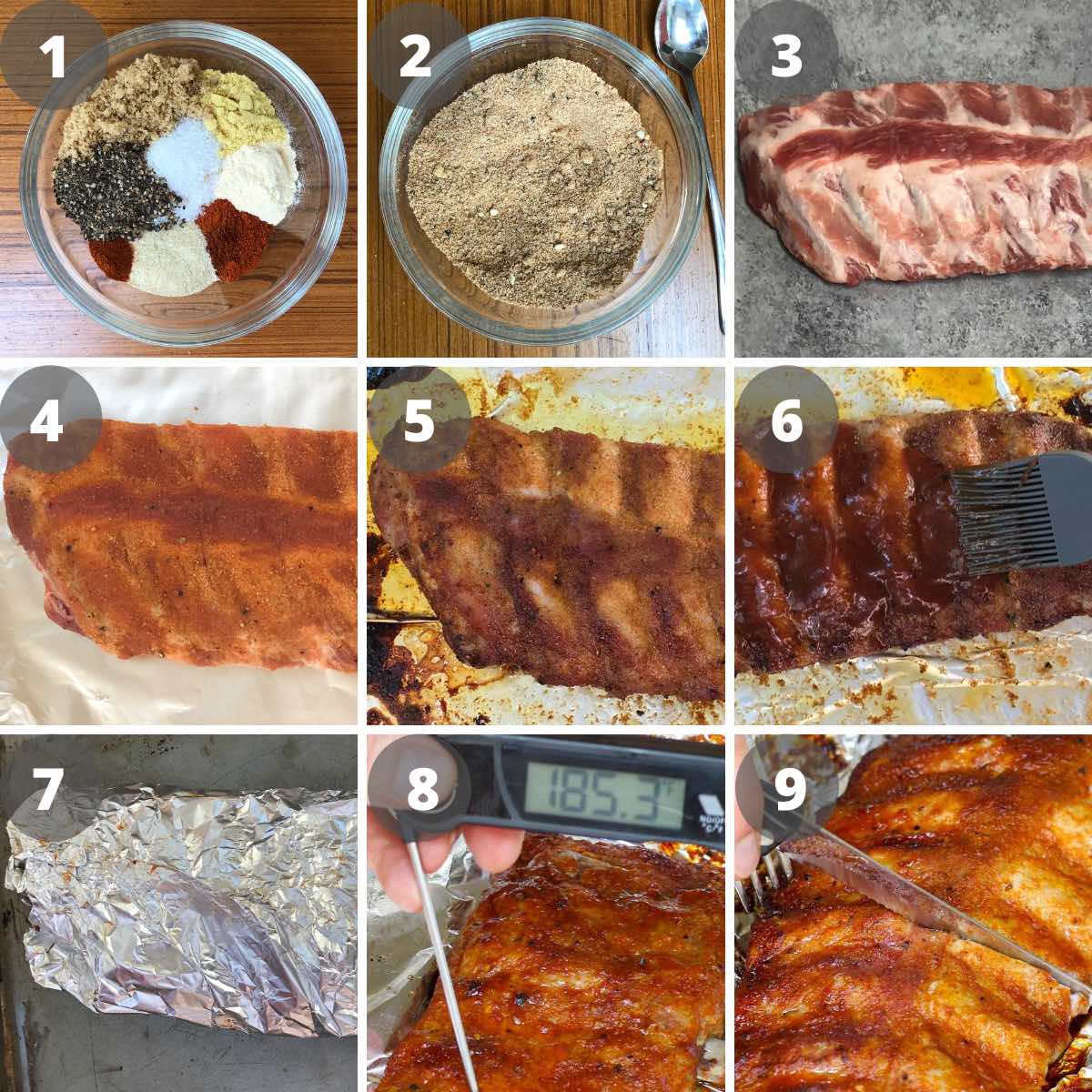 Preparing the ribs: Rub the ribs all over with the seasonings. Then place them meat side down (fat side up) in a single layer in a rectangular baking pan or sheet pan lined with parchment (I prefer a broiler pan or roasting pan with a rack to let the fat drip away.)

Baking the ribs: Place the ribs in a preheated oven. If you want to sauce your ribs, simply remove the ribs from the oven 30-60 minutes before they’re done and brush with sauce. Put them back to the oven until they’re done.

Resting: Once the ribs are done, let them rest covered with foil for 5-10 minutes before serving. This important step allows the juices can retreat back into the meat, so they’re nice and tender.

How long to cook short ribs in the oven at 350?

Back ribs take approximately 2 hours at 350.

How long to cook country-style ribs in the oven at 350?

It depends on how thickly they are cut. For 1-inch thick ribs, they’ll need about an hour and a half. 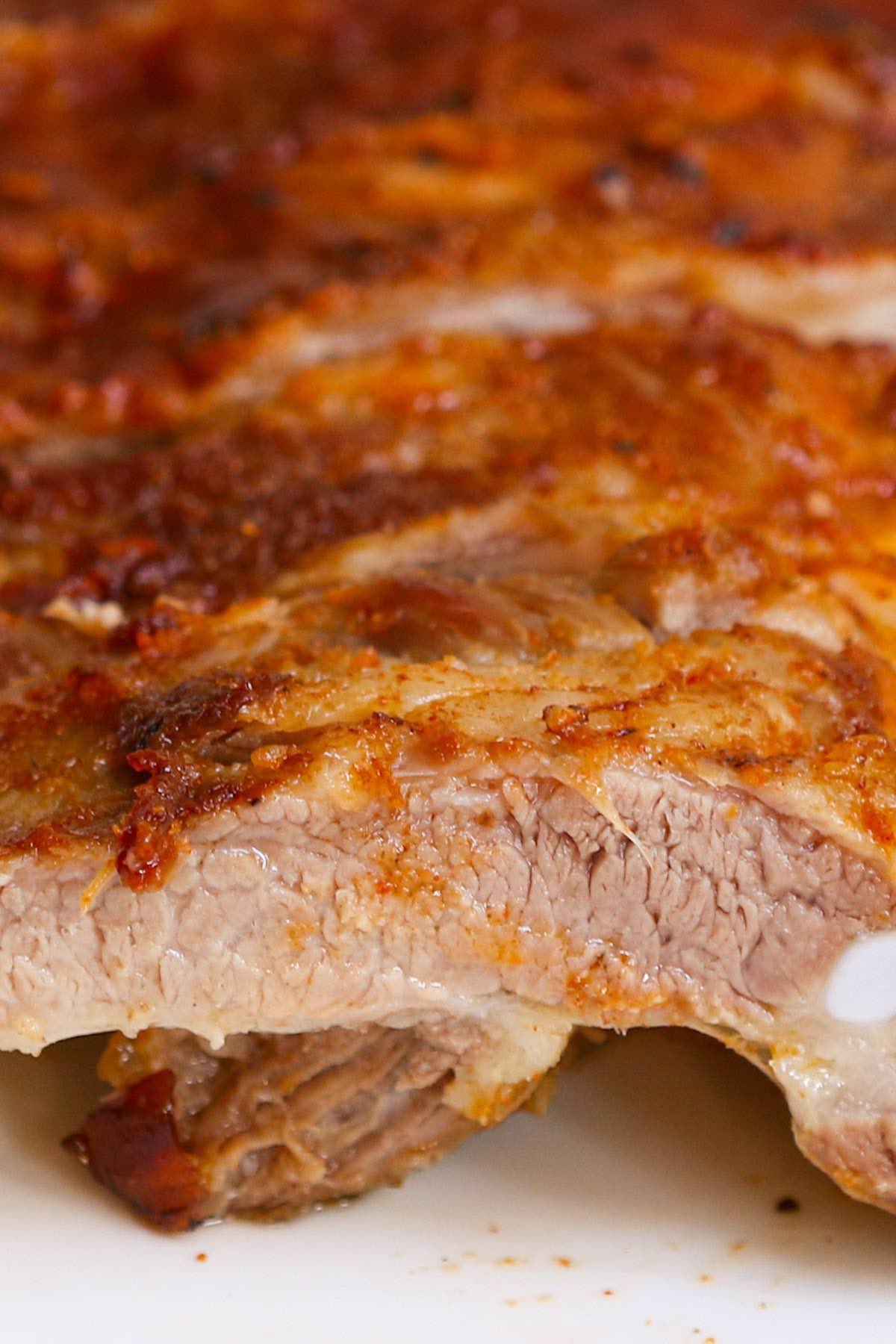 Can you overcook ribs?

Yes, ribs will dry out when overcooked, becoming tough and chewy. You can reduce the risk of overcooked ribs by choosing to bake them at lower temperatures, which cook more slowly and are more forgiving.

Should I wrap ribs in foil?

Wrapping ribs in foil produces moister meat with slightly faster cooking, although they won’t form a crispy crust on the outside. Recipes such as 3-2-1 Ribs start by baking the ribs uncovered and wrap them for the later stages of cooking.

More How Long to Bake Guides 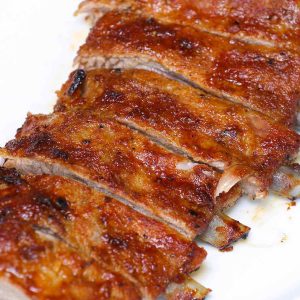 Print
5 from 9 votes
Leave a review »

This step-by-step guide covers how long to bake pork ribs at 350, which is one of the most common temperatures for ribs in the oven.
Prep Time: 10 mins
Cook Time: 3 hrs
Total Time: 3 hrs 10 mins
Servings: 4 people

23 comments on “How Long to Cook Ribs in the Oven”