Scalloped Potatoes and Ham loaded with tender potatoes, layered with ham and cheese and smothered in a rich and creamy sauce. The best way to achieve soft and creamy potatoes is by par-boiling the potatoes first before baking. This Scalloped Potatoes recipe is so easy and cuts the cooking time nearly in half. 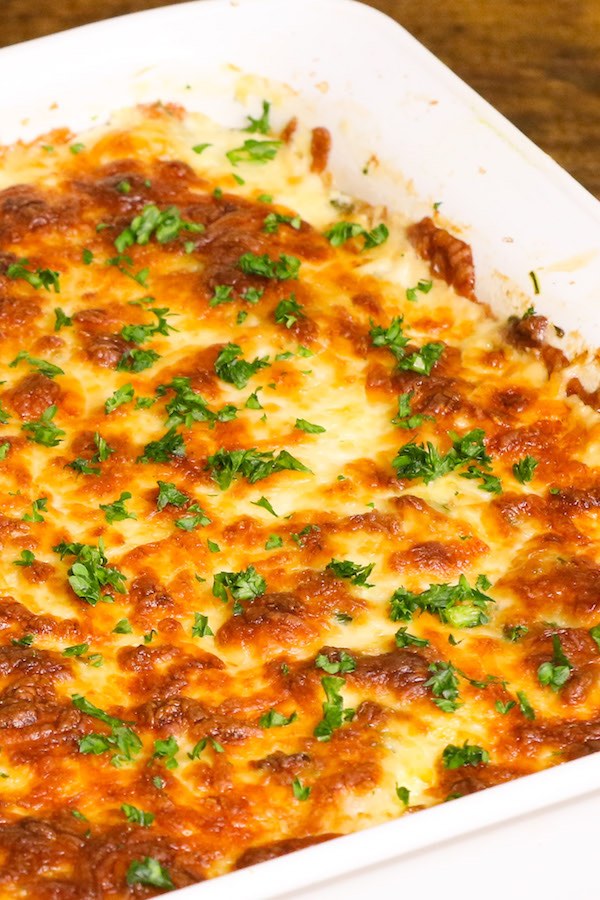 This Scalloped Potatoes with Ham is an entrée recipe that’s perfect to feed a crowd. You can also cook the cheesy scalloped potatoes without ham and make it into a great side dish.

WHAT ARE SCALLOPED POTATOES? ”Scalloped Potatoes” means slices of potatoes. Thin potato slices are layered and then baked with creamy sauce. It tastes a lot like Potato Casserole and Potatoes au Gratin.

This Cheesy Scalloped Potatoes and Ham recipe is really easy to make and unbelievably delicious. Trust me, it will become your favorite way to make potato casserole! 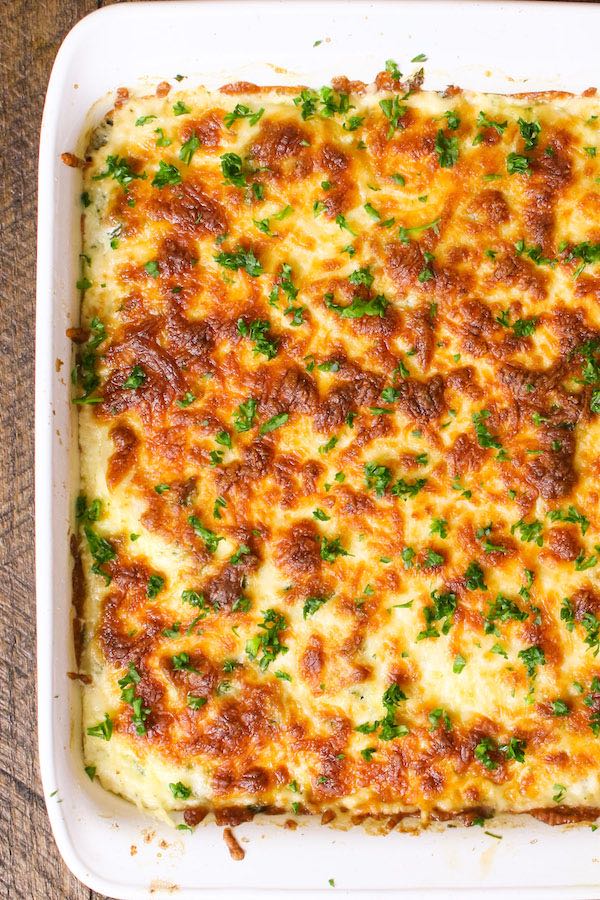 Most scalloped potatoes recipes call for baking the dish with raw potatoes. Sure, that’s easy to do, but it usually takes for about an hour to bake. Sometimes cheese can get burned while potatoes are not thoroughly cooked. The best way is to par-boil the potatoes before baking, and it will ensure the potatoes get cooked evenly. What’s more, it cuts the normal baking time nearly in half.

HOW TO MAKE SCALLOPED POTATOES AND HAM

This homemade scalloped potatoes and ham casserole is really easy to make with just a few simple ingredients. 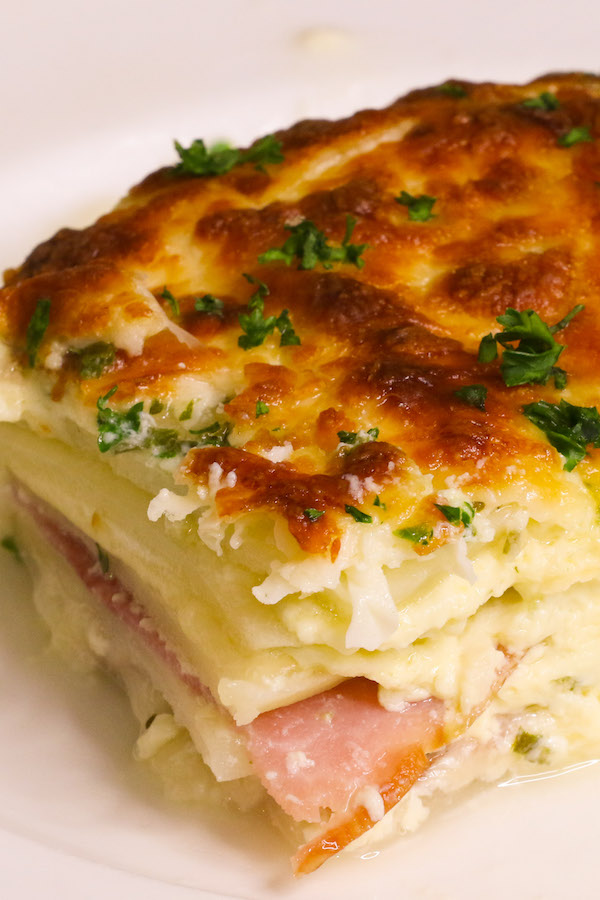 What Types of Potatoes Should I Use for Scalloped Potatoes?

Choose starchy types of potatoes such as Yukon gold potatoes for this recipe. The starchy content helps the potatoes hold the shape and create a creamy and buttery texture. Yukon gold is my favorite potatoes to use for scalloped potatoes recipe as they hold the shape the best through baking. Russets are also a good choice as they have the most starch and can absorb the creamy sauce really nicely.

What Kind of Cheese Should I Use?

I used two types of cheese in this recipe: sharp cheddar for the cheese sauce and mozzarella for topping. Sharp cheddar has a strong flavor and melts very nicely. Mozzarella topping helps to create a nice cheesy and browned crust on top of the potatoes. But other cheeses such as Gruyere, Swiss, Colby, Monterrey Jack and Fontina work well too. You can customize it to your own preference.

To make the cheese sauce for scalloped potatoes, I use milk instead of cream. Melt butter, onion and garlic in a saucepan over medium heat, whisk in the flour until well-combined, and then add in milk. Stir often and let it get warm but not boiling, for about 2-3 minutes. Reduce the heat to simmer and stir in shredded cheddar cheese, salt and pepper. Whisk until well mixed. Now it’s ready to be poured over the layered potatoes and ham! The sauce is called roux or béchamel style white sauce.

Grease a 9″x13″ baking dish. Place half of the sliced potatoes in an even layer in the baking dish and top with 1 layer of sliced ham. Spoon half of the cheese sauce and spread it evenly on top. Repeat layers ending with cheese sauce, and then top with mozzarella cheese. Cover with aluminum foil. 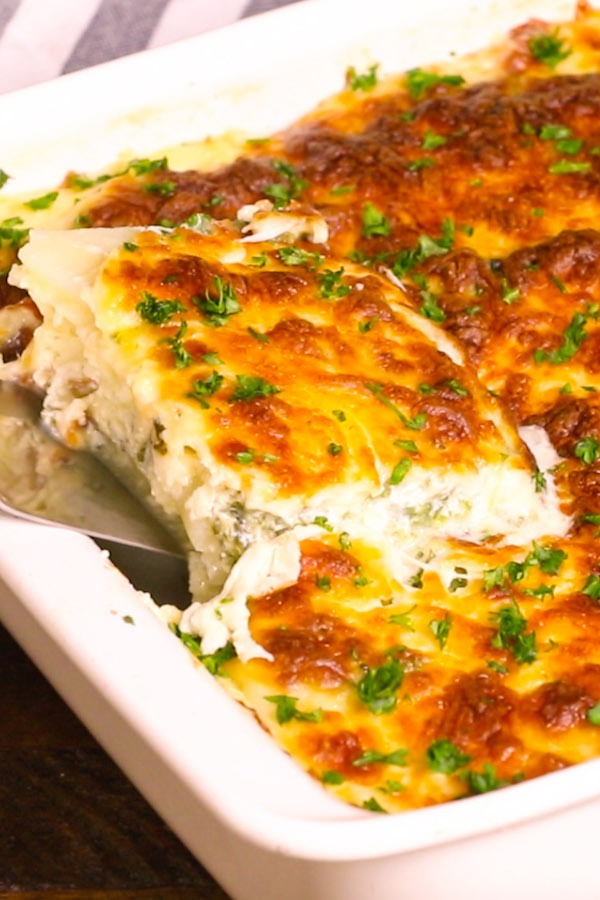 WHAT TEMPERATURE DO YOU COOK SCALLOPED POTATOES WITH HAM?

This scalloped potatoes with cheese get two temperature treatments. I cook it at 375°F first to ensure cheese is melted and the dish is heated through. Then I broiled it on high to get the cheesy topping turn to golden brown and bubbly.

HOW LONG DO YOU BAKE SCALLOPED POTATOES IN OVEN?

It takes about 20 minutes at 375°F to bake the dish thoroughly. Then I broil the casserole on high for about 3 to 5 minutes or until the cheese turns brown and sizzling.  If you decide to bake the casserole with raw potatoes, you need to adjust the baking time to over 1 hour.

This Creamy Scalloped Potatoes and Ham is perfect to make ahead. Just follow the recipe instruction and bake the casserole. Let them cool to room temperature completely, and cover tightly with a plastic wrap. Store it in the refrigerator for up to 3 days. 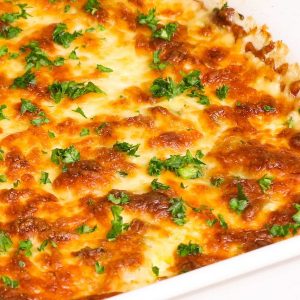 2 comments on “Scalloped Potatoes and Ham”