It’s hard to beat a Kansas City Strip Steak! This mouthwatering beef cut is simply a tender and juicy New York strip steak with the bone in. It’s easy to prepare and will be on your table in minutes!

Kansas City strip steaks are an affordable way to enjoy a premium cut! You get robust marbling and phenomenal flavor as a New York strip for far less money, explaining why this is one of beef lovers’ favorite types of steak!

There are many ways to cook a Kansas City strip, including grilling, pan searing, baking in the oven, broiling, even sous vide! It truly melts in your mouth with memorable flavors, so let’s get started.

What Cut is a Kansas City Strip?

The Kansas City Strip Steak comes from the tender multifidus dorsi muscle in the short loin of a cow. Thanks to its marbling, it has a robust beefy flavor and slight chew that many people enjoy.

As a less well-known cut, the Kansas City Strip is often priced well below a New York Strip, making it a more affordable option.

Here are the ingredients you’ll need for this Kansas City Strip steak recipe:

You can also optionally add some butter and fresh rosemary or thyme for extra flavor as you like.

How to Cook a Kansas City Strip Steak

There are several different ways to cook a Kansas City strip steak:

While these are the most popular, you can also consider using sous vide or other methods too.

The Kansas City Strip gets a 7/10 rating from beefresearch.org, meaning it’s quite tender and surpassed only by cuts such as a filet mignon or rib-eye (or T-bone/Porterhouse, which already include the strip). The bone actually helps the meat to retain moisture during cooking, allowing it to come out more tender and juicy than even a New York strip.

Which is Better: Ribeye Or Kansas City Strip?

While beef preferences are always personal, the Ribeye is considered to be the winner over the Kansas City Strip. It has a slightly higher tenderness rating of 8/10 thanks to more marbling. The ribeye is also priced at a significant premium, indicating that it’s a more popular cut.

When Is the Steak Done?

The USDA‘s latest guidance states that for safety reasons beef steaks should be cooked to an internal temperature of 145°F before removing from the heat. That corresponds to a medium to medium-well doneness with a cool pink center. Measure it using an instant-read thermometer inserted into the middle about 1 inch from the bone.

What to Serve with a Strip Steak 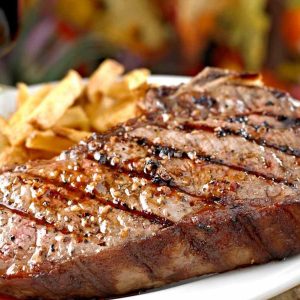 It's hard to beat a Kansas City Strip Steak! This beef cut is simply a New York strip steak with the bone in, and it's tender and juicy with oh-so much flavor. Plus, you can prepare it in minutes!
Prep Time: 10 mins
Cook Time: 10 mins
Total Time: 20 mins
Servings: 4 servings