How Long to Cook a Ham

Wondering how long to cook a ham for the best flavor? Discover handy tips on how to cook a ham plus ham cooking times for spiral, pre-cooked, bone-in, boneless and uncooked hams.

Hams are an important part of many holiday celebrations, from Christmas to Easter and more. However, let’s face it: no two hams are the same! The weight and size can vary along with the type of ham itself.

There’s no need to stress – you’ve got this! Enjoy a mouthwatering ham every time with these easy tips.

How Long to Cook a Spiral Ham

Spiral cut hams are some of the most popular types of hams. They are typically 8 to 11 pounds and come fully pre-cooked (check the package to confirm this). That means you are only reheating it to an internal temperature of 140°F.

The most effective way to do this is to use a low temperature and bake at 250°F to prevent the outside from becoming dry.

At this temperature, it will take 13 to 16 minutes per pound, or roughly 2 hours for an 8 pound ham.

How Long to Cook a Fully Cooked Ham

A precooked boneless ham will take 10 to 12 minutes per pound, or just over 3 hours for an 8 pound ham. Note: By increasing your oven temperature to 350°F, you will reduce the times above by about 5 minutes per pound.

How Long to Cook a Bone In Ham

Pre-cooked bone-in hams tend to heat differently than boneless, as the bone affects the heat distribution through the meat. Here is a ham cook time chart for bone-in hams:

Far less common, unsmoked ham usually features a warning to cook thoroughly before eating. It should be cooked at 325°F until its internal temperature reaches 145°F according to the USDA. This process can take anywhere between 18 and 35 minutes per pound.

See below for an uncooked smoked ham cook time chart:

How Long to Cook a Raw Ham?

How Long to Cook Ham in the Crock Pot?

A small ham will reach the USDA-recommended temp of 140°F in about 2 to 3 hours on a Low setting in the crock pot, while a large ham will take 4 to 6 hours on Low.

How Long Does Cooked Ham Last in the Fridge?

Cooked ham will last up to 3 days in an airtight container in the fridge, or up to 2 months when properly stored in the freezer.

Tips for Glazing and Roasting Ham

If you’re cooking ham, a delicious glaze will definitely take it to the next level.

Before placing your ham in the oven, score the ham skin in vertical and diagonal rows every 2 inches in a crosshatch pattern. This simple trick allows the glaze to soak into the meat while it finishes roasting, giving you that delightfully crispy and sweet finish.

Once your ham is in the oven and is about 40 minutes away from being done, brush the glaze liberally across the skin’s surface every 10 to 20 minutes.

Side Dishes to Serve with Ham

View all side dishes 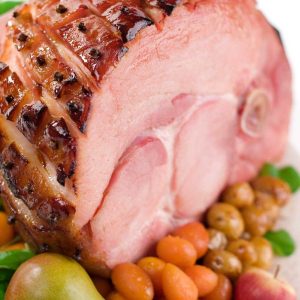 How Long to Cook a Ham

Learn how long to cook a ham so it comes out just right. This recipe shows you how to cook a ham to perfection every time!
Prep Time: 10 mins
Cook Time: 2 hrs
Total Time: 2 hrs 10 mins
Servings: 16 servings

Author: TipBuzz
Course: Main Course
Cuisine: World
Keyword: ham cook time, ham cooking time, how long to cook a ham, how to cook a ham
Did you make this recipe? Leave a comment below!