Start your day with this delicious Breakfast Pizza topped with bacon, eggs and mozzarella cheese! This easy recipe is baked in the oven to golden perfection in just 15 minutes. The perfect way to feed family and friends over weekends or holidays! 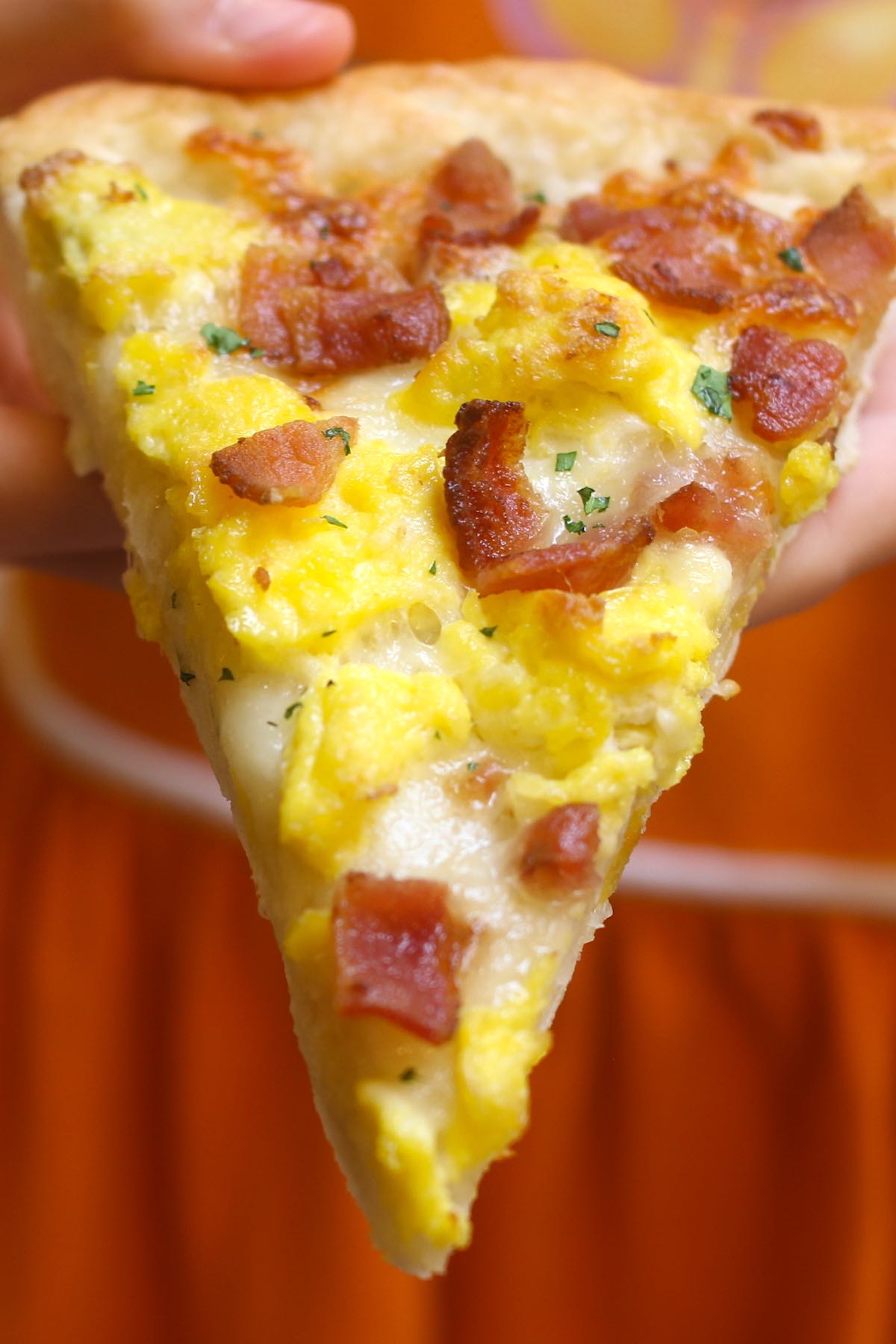 Pizza is one of the best things to eat for breakfast. Not only is it energy boosting, but you get protein and carbs with a fraction of the sugar contained in breakfast cereals.

The best part is you can easily customize the toppings how you like. Prefer ham instead of bacon – no problem! Like cheddar more than mozzarella – that’s work. It’s a scrumptuous breakfast to feed the whole family on weekends and holidays!

How to Make Breakfast Pizza

You can make this breakfast pizza recipe from scratch using homemade pizza dough, or simply use your favorite store-bought crust to save time. You can also prepare the pizza dough and toppings the night before for easy prep in the morning. 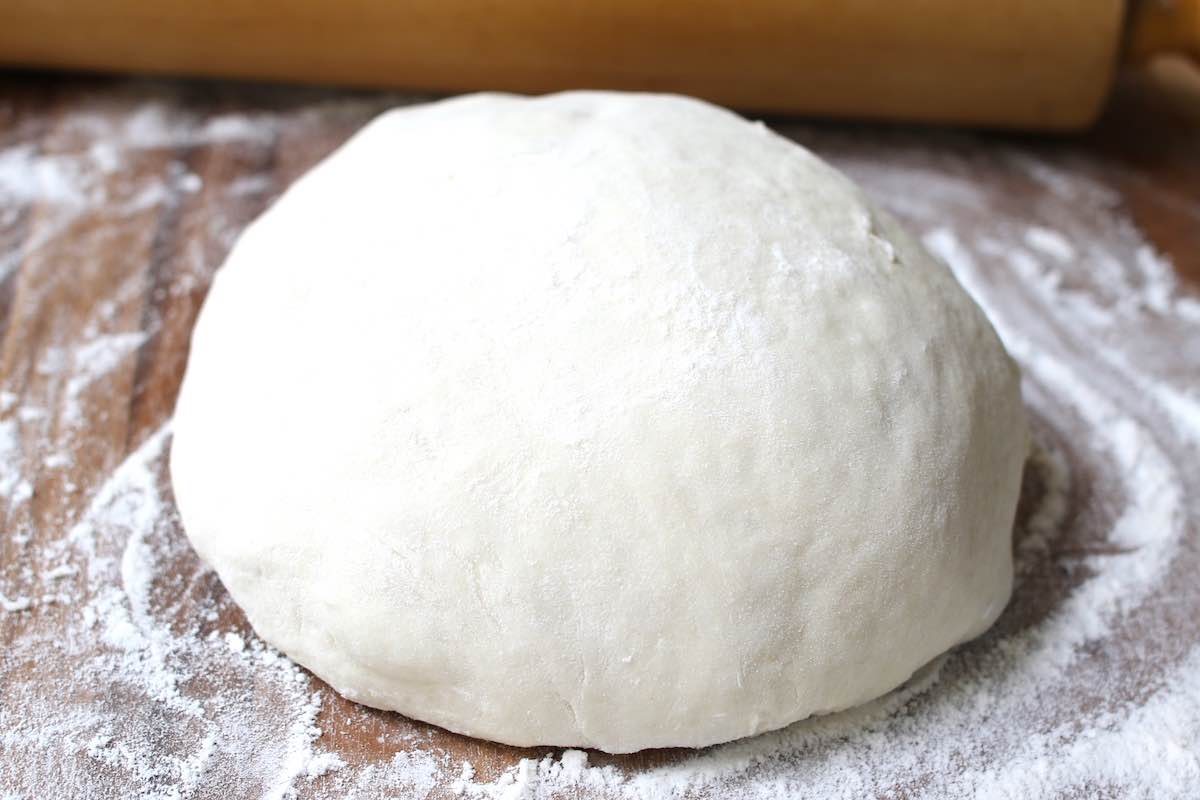 Start by making the pizza dough so it can rise while you’re getting the other ingredients ready.

Next, you’ll want to cook the bacon until crispy, either in a skillet or the oven. (You can also by pre-cooked bacon if you prefer.) Once it’s ready, crumble into pieces and set aside. Avoid putting uncooked bacon on the pizza, as it’ll turn out rubbery. 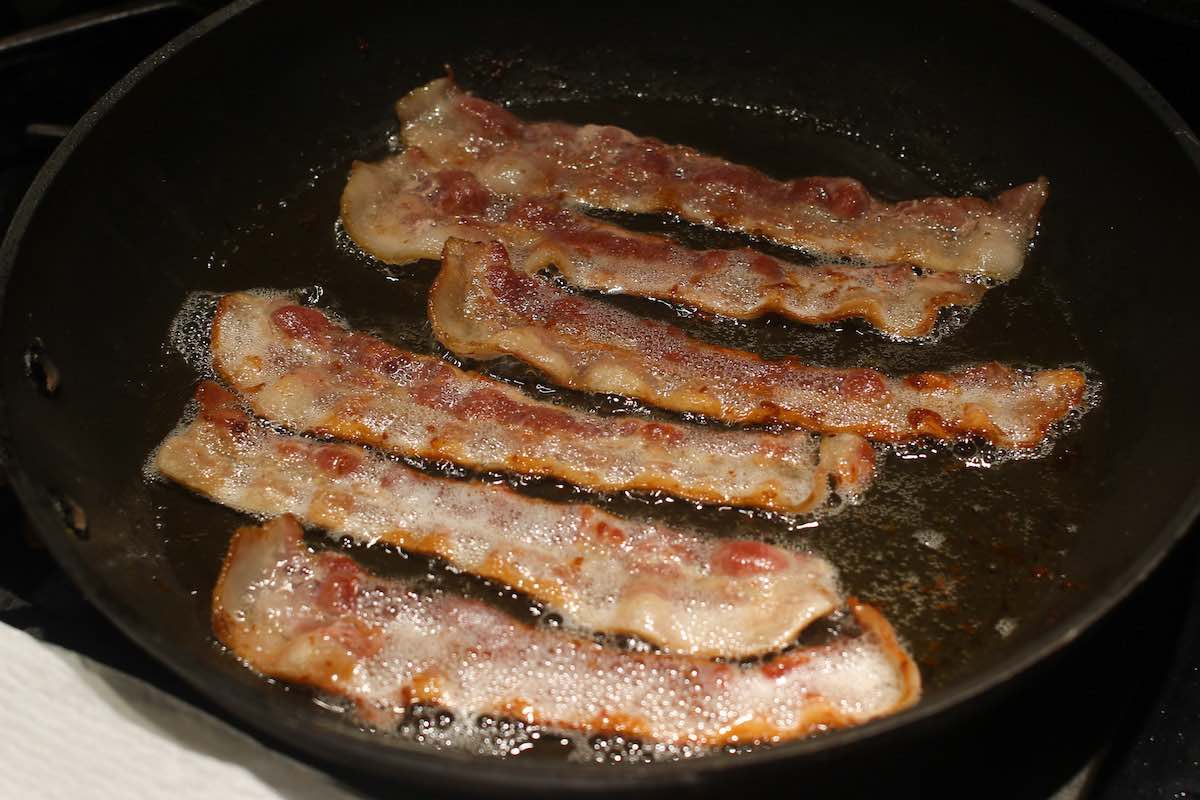 Then beat some eggs and scramble them in a nonstick skillet until slightly runny. You can do this over medium heat using a spatula to pull the outer edges towards the center and fold until no liquid egg remains.

Remember the eggs will cook more in the oven to become fluffy, so softly set at this point is enough. 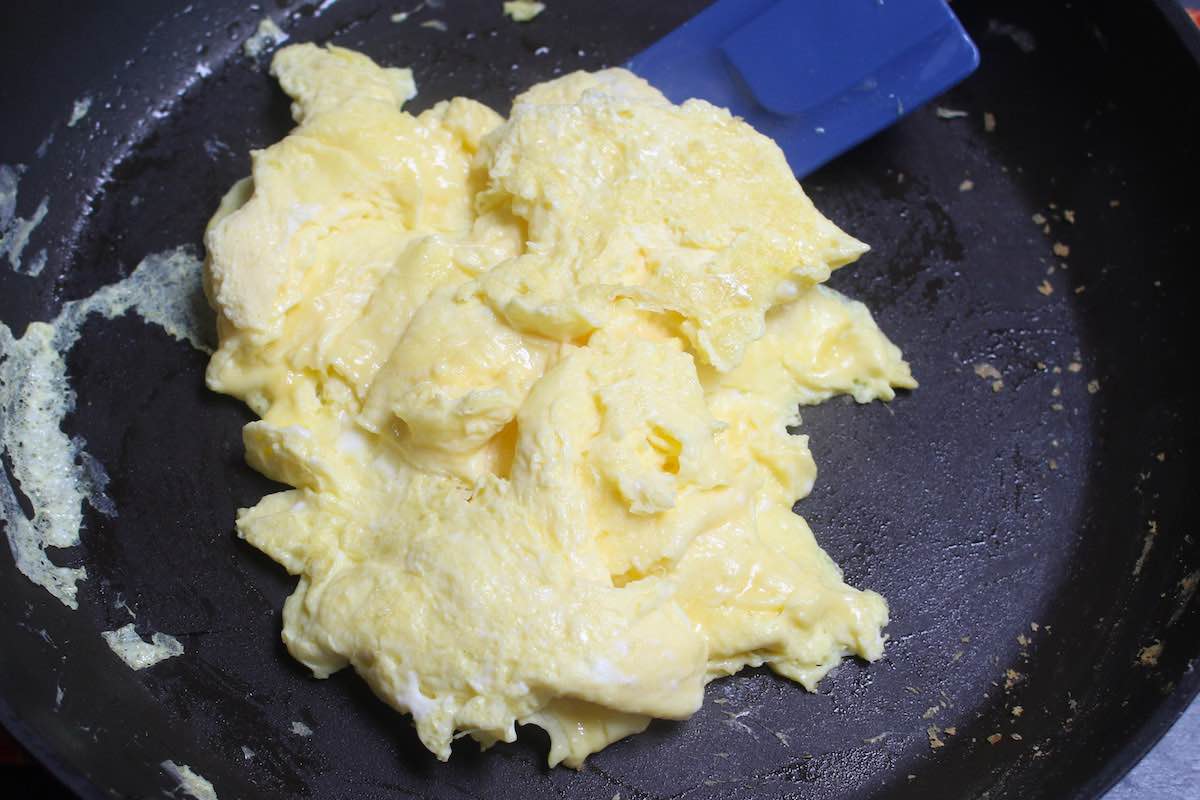 Stretch the pizza dough into a 12-inch (30cm) circle on a non-stick pizza pan. Poke hole across the surface using a fork to prevent it from puffing up in the oven. Brush with oil followed by the mozzarella cheese, eggs and cooked bacon. 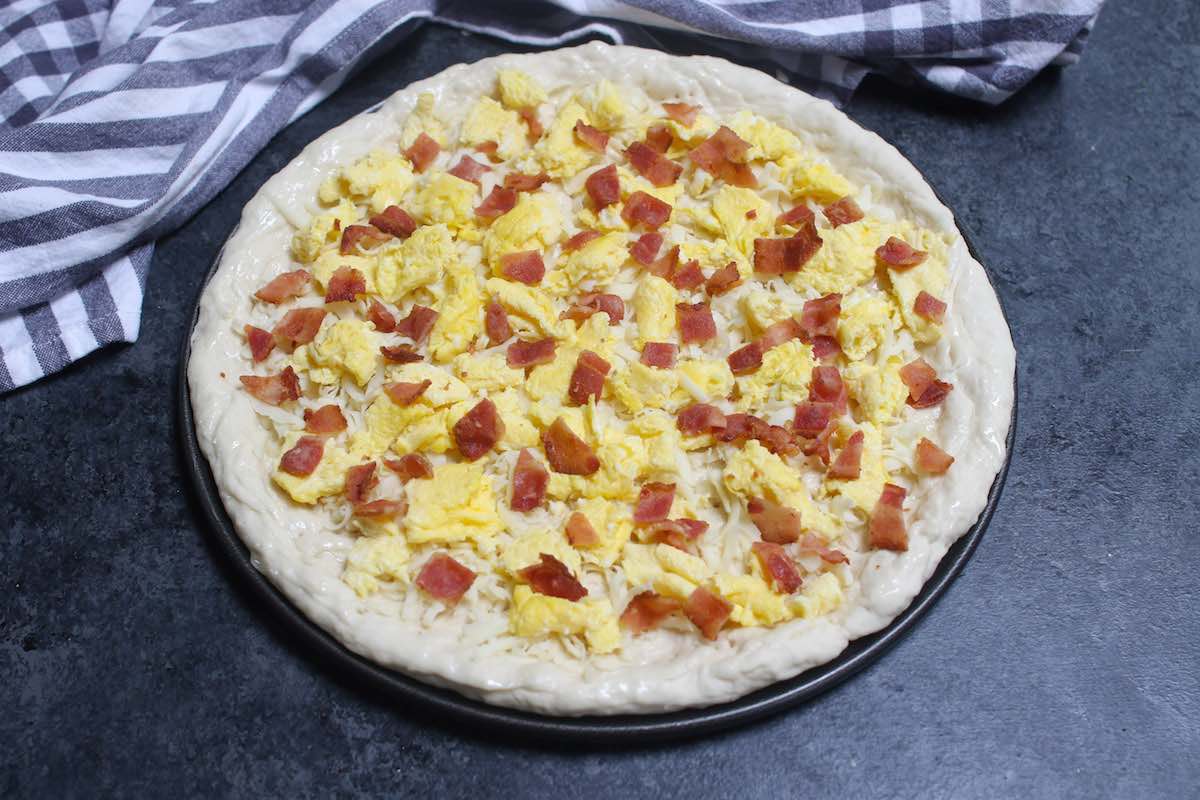 Bake the pizza in a 475°F oven until the crust is golden and the cheese is bubbly, about 12-15 minutes. Remove from the oven and serve warm. 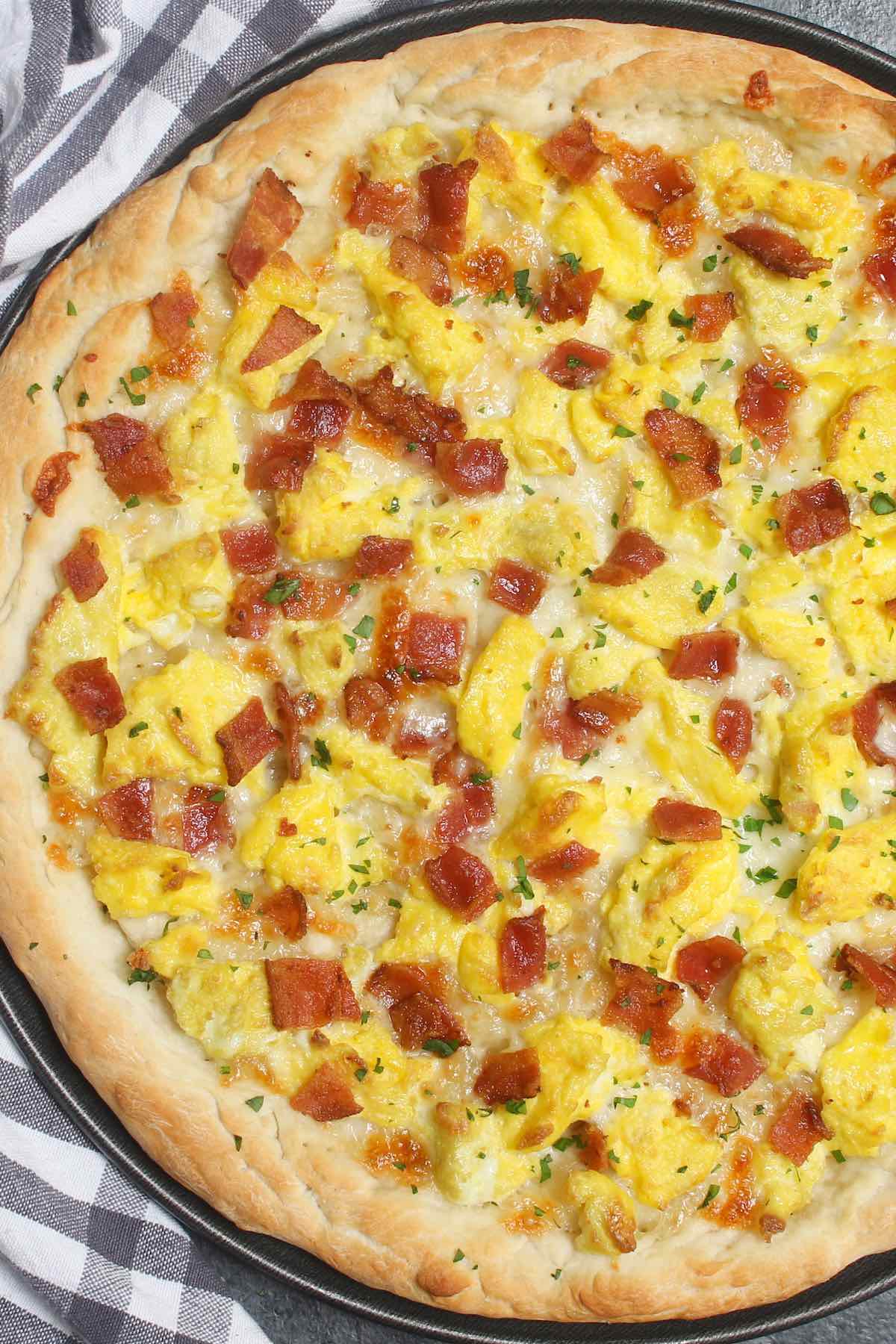 Ok, this is where you can get creative! The original idea behind breakfast pizza was to get all the standard breakfast fixing on an easy-eating pizza crust. Below are my favorites, but the possibilities are endless!

Dough: Storebought pizza doughs such as Pillsbury will work here. You can also make a crust out of hash browns, naan or flour tortillas.

Cheese: Mozzarella is a top choice. Look for whole milk, low-moisture mozzarella (usually 45-52%) that’s not packed in water. Avoid pre-shredded which won’t melt as easily and can also brown on the crust. Other choices include mild cheddar or jack. 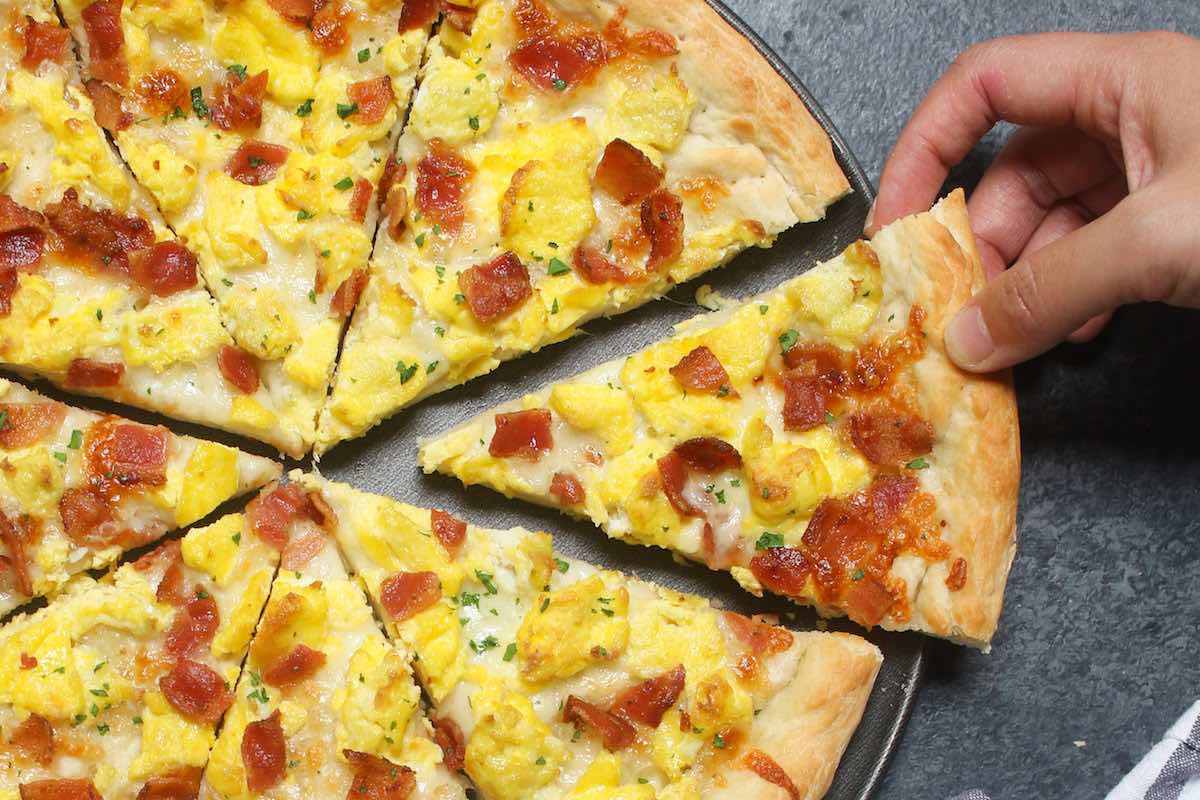 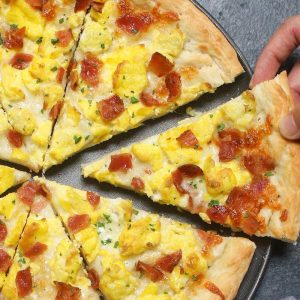