Swineapple is mouthwatering barbecue at its best! This swineapple recipe uses a peeled and cored pineapple stuffed with pork ribs and wrapped in bacon. It’s then smoked (or grilled) low-and-slow to juicy perfection!

Looking for some new ideas for grilling season? Swineapple always steals the show with its crispy exterior and unbelievably juicy inside. Perfect for any backyard barbecue or a special occasion like Memorial Day, Father’s Day or Fourth! While smoking is preferred, grilling low-and-slow works well too.

The swineapple sensation began slowly in 2015 when meat smoker Josh Bush of Laporte, Texas posted it on Facebook. Several years later it went viral. For those of us who got a taste of it, the memories (and cravings) remain!

Swineapple is exactly what it sounds like: a delicious combination of pork and pineapple. You stuff a pineapple with boneless pork ribs, wrap with thick-cut bacon and grill on low heat. The pineapple bastes the pork during cooking to make an unbelievably tender and delicious dish that vaguely resembles roast Kalua pig.

Here’s what you’ll need to make it:

You will need some bamboo skewers to hold the swineapple together during cooking.

How to Make BBQ Swineapple

There are three parts to any swineapple recipe:

2. The ribs: You need to coat the ribs in bbq sauce and seasoning before stuffing into the pineapple:

3. The bacon: On a piece of parchment, arrange the bacon in a 5×5 pattern to make a weave. Then you’re going to wrap it around the pineapple and fasten with bamboo skewers:

Now you’re ready for smoking. I recommend using a Traeger or another smoker at 275°F using apple or cherry wood (although hickory works too); however, I’ve had great results with the grill as well.

Put the swineapple on a perforated metal tray or a double layer of foil with a few holes poked into it to prevent the juices from accumulating. You also want to baste the swineapple occasionally with reserved juices during cooking to keep it moist.

How Long Do You Smoke a Swineapple?

It takes approximately 3 hours to smoke a swineapple. The bacon on the outside should be crispy, and the internal temperature should measure 145-150°F.

If you have one, use a dual-probe wireless thermometer to track the internal temperature. Alternatively start checking after 3 hours using an instant-read thermometer. Swineapple is done when the middle reaches 145-150°F!

I like to cut the swineapple widthwise into 1-inch slices (use a sharp carving knife and fork to get a clean cut). You can eat it as is with side dishes or make it into a sandwich:

The possibilities are endless! 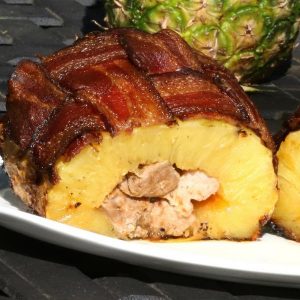