How Long to Cook Chuck Roast in Oven at 350

Chuck roasts are a fairly inexpensive cut of beef coming from the shoulder, which is very flavorful due to the exercise it gets. At the same time, it’s a tough cut that requires hours or braising to become tender. That means cooking in the oven as a pot roast with liquid in a Dutch oven or a similar pot.

Cooking it at 350 is on the high end of the temperature range for pot roasts, making it faster but also easier to overcook. Follow our tips and tricks below to determine how to get it just right!

How Long to Cook Chuck Roast in Oven Per Pound

The rule of thumb is one hour per pound for a pot roast. However, this assumes a middle-of-the-road oven temperature of 300°F (150°C).

How Long to Cook a Chuck Roast in Oven

Sometimes a pot roast is sharing an oven with dishes requiring a different temperature. In those cases, here are cooking times for various sizes of chuck roasts at several oven temperatures:

When you look at how long to cook chuck roast in oven at 350, you can see the times are an hour less on average.

How to Cook Chuck Roast in the Oven

Cooking your chuck roast in the oven is pretty straightforward. Start by patting the meat dry with paper towel and rubbing with canola oil and some seasonings.

Place in a cast iron or nonstick skillet over high temperature. Using kitchen tongs, place the roast in the hot pan and turn every minutes or so to let it brown on all sides. While this step is optional, the browning brings out more flavor in the final dish.

Next, remove the meat to a Dutch oven or enamelled pot. Add onions and garlic back to the skillet and sauté with a wooden spoon for a minute or two with to soften slightly. Pour in the chicken broth and red wine. This deglazes all the delectable browned bits of beef from the skillet.

Now, put the meat, vegetables and liquid into the Dutch oven. Cover and place in a preheated oven. When it’s done, the chuck roast will shred easily and have reached an internal temperature of at least 202°F in the center.

Tips for the Perfect Chuck Roast:

How Long to Cook 2 lb Chuck Roast in Oven?

How to Cook a Chuck Roast in the Oven Fast?

There is unfortunately no easy way to cook a chuck roast fast, as it’s a tough cut of beef that requires hours of braising to become tender. However, you can cut a large chuck roast into 2 to 3 smaller pieces and cook it at 350°F to save an hour or two.

How Long to Cook Chuck Roast in Crock Pot?

When using a Crock Pot or slow cooker, it’s best to use the Low setting. It will take 8 hours to cook a 4 pound chuck roast in the slow cooker before it’s tender. If you are in a hurry, you can try using a High setting for 4 to 5 hours, but the meat will be less tender. 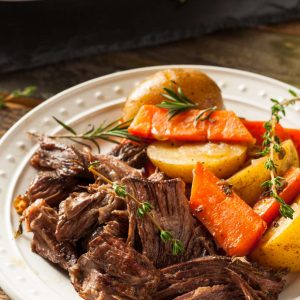 How to Cook a Chuck Roast in the Oven