These Raspberry Coconut Magic Bars feature a mouthwatering coconut-almond crust, a creamy cheesecake layer and a melted chocolate topping. This no bake dessert is easy to make ahead for parties, potlucks, barbecues and picnics! 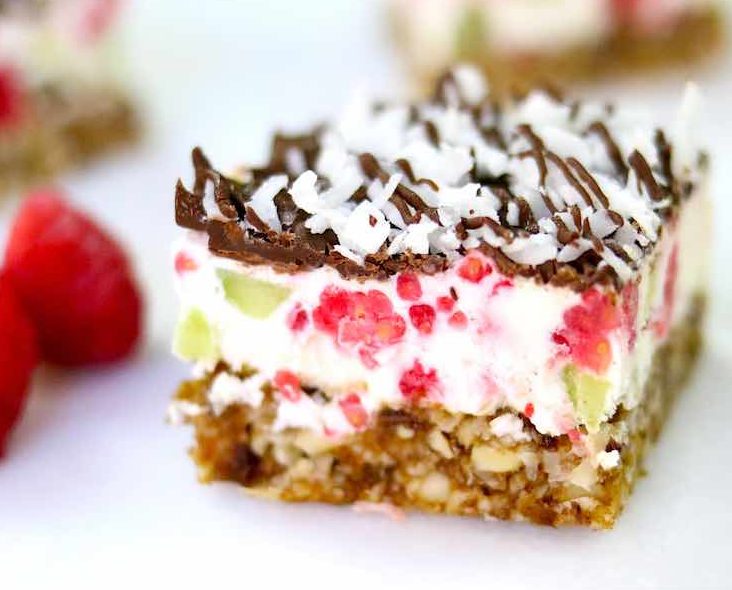 These Raspberry Coconut Magic Bars are creamy, nutritious and a guaranteed hit with coconut lovers. There are three mouthwatering layers: a base of almonds, dates and coconut; a middle layer of creamy cheesecake with raspberry, and a melted chocolate topping with more coconut!

We love to make them in summer when it’s too hot for baking, and you only need 15 minutes of prep before they go into the fridge to firm up. These magic bars are one of my go-to recipes for a potluck or BBQ. It’s also a great activity to do with the kids!

How to Make Raspberry Coconut Bars

While the three layers sound complicated, making these bars is actually a cinch. Here’s how to do it:

First, line a square baking pan or loaf pan with parchment or foil. Then, use a spatula to press the base layer in first. Next, spread the cream cheese layer. Last, drizzle the melted chocolate evenly across the top.

Chill for 4 hours to firm up before serving. If you’re in a hurry, you can freeze for one hour instead.

This video tutorial shows how to make these raspberry coconut magic bars:

View all no bake desserts 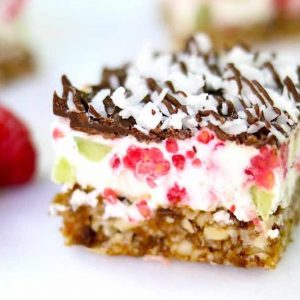