French pancakes or crêpes are one of France’s culinary masterpieces! They are thinner than American pancakes and typically stuffed with delicious sweet or savory fillings. Perfect for breakfast, brunch or dessert!

As the saying goes … when in Rome do as the Romans. When in Paris, be sure to visit a crêperie to enjoy delicious french pancakes made à la minute right in front of you! If you can’t make it to France, then try making your own using this classic crêpe recipe!

Making your own delectable French pancakes at home is easier than you think. Plus, they’re fabulous for breakfast, lunch, dinner or even a midnight snack!

What’s the Other Name for a Thin French Pancake?

A thin French pancake is also known as a crêpe (pronounced Kr-ehp in French) with an English spelling of crepe (pronounced as krayp).

Savory French pancakes in northwestern France are often referred to as galettes de sarrasin or in English as buckwheat crepes.

What is the Difference Between French Crepes and Pancakes?

The key difference is that pancakes are leavened with baking powder or yeast, while French crepes are not. As a result, pancakes end up being light and fluffy, while crepes are thin and moist. Pancakes often have toppings like berries, while crepes have fillings.

Crêpes can be eaten plain but are usually stuffed with either a sweet or savory filling. can be either savory or sweet with fillings running the gambit from Nutella and bananas to chocolate and whipped cream and whipped cream and served for dessert or breakfast. Savory crepes can be filled with eggs, cheese, meat or vegetables.

French pancakes are usually filled or topped with tasty ingredients which can be sweet or savory. Sweet crepes are usually eaten for breakfast or as a dessert and usually include fruit, chocolate, powdered sugar or whipped cream. One of the most popular sweet crepes includes Nutella, strawberries and bananas. Savory crepes can be eaten at any time of the day and may include meat, vegetables, eggs. How about a smoked salmon and cream cheese crepe for lunch?

There are several ways to fold crepe for serving. After adding your fillings, you can simply fold one half of the crepe over the other in a semicircle, like you would with an omelette. Traditionally If you like, you can add more fillings and  fold it again into quarters. You can also fill the crepes, then roll them like a burrito.

How to Store French Pancakes?

If you have leftover crepes, you can store them for later. The best way to do this is to place sheets of parchment paper between the crepes to keep them from sticking together. French pancakes can be stored in an airtight container in the fridge for two days or can be frozen for up to a month. Reheat on the stovetop or in the microwave. 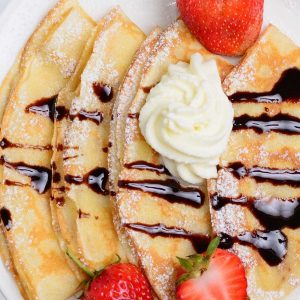