Coconut Pecan Frosting is the finishing touch on German chocolate cake. This decadent filling and topping features a mouthwatering custard base with coconut and chopped pecans!

One of my all-time favorite desserts is layered German chocolate cake with this frosting as a filling and topping. Perfect for any celebration, backyard BBQ or whenever you have cravings. So let’s get started!

What Is German Chocolate Frosting Made Of?

German chocolate cake has a frosting made with butter, sugar, eggs, evaporated milk and vanilla heated over low-to-medium heat until thickened. Then shredded coconut and chopped pecans are added. This recipe was invented by a fellow named German at Baker’s Chocolate in 1957 and has remained popular ever since.

Here’s what you’ll need to make it:

How to Make Coconut Pecan Frosting

The first step is to toast the pecans in the oven on a baking sheet. While strictly speaking it’s not necessary, the enhanced flavor is vastly superior and worth the effort.

Next, make the custard by adding the butter, sugar, evaporated milk and vanilla to a small saucepan. Whisk slowly over low-to-medium heat for about 5 minutes until dissolved completely. Then whisk in the egg yolks one-by-one until it starts to thicken into a custard.

The final step is to transfer to a mixing bowl and stir in the pecans and coconut. It will still be slightly runny, but will thicken as it cools at room temperature in under an hour.

How Do You Thicken Coconut Pecan Frosting?

Don’t worry if your coconut pecan frosting is a bit thin. Simply cook it a bit longer in the saucepan stirring continuously so more moisture evaporates. Alternatively, you can make a slurry of one teaspoon of cornstarch combined with one teaspoon of water. Then, stir it into the custard in the saucepan and let it bubble for a minute or two to thicken up.

How to Make Coconut Pecan Frosting Without Evaporated Milk?

The most decadent alternative to evaporated milk is substituting heavy cream directly. Healthier options include coconut milk or almond milk.

Does Coconut Pecan Frosting Need to be Refrigerated?

This frosting is perishable and must be stored in the fridge to avoid spoilage. Refrigerating also helps to maintain a thick and creamy consistency.

How Long Does Coconut Pecan Frosting Last in the Fridge?

This frosting will last up to a week in the fridge in an airtight container. You can also freeze it for up to two months in freezer-safe bags or containers.

Why Is My Coconut Pecan Frosting Grainy?

This usually happens when the granulated sugar does not dissolve completely in the saucepan. Try heating a bit longer and/or whisking more vigorously after adding the evaporated milk.

There are a number of delicious variations on the traditional recipe: 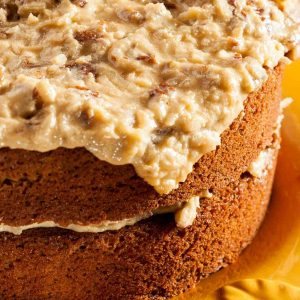 Make the Frosting Base