This Cinnamon Roll Apple Bake is a decadent combination of cinnamon rolls and apple pie filling! Soft and moist served warm out of the oven, it’s perfect for breakfast, brunch, parties and more!

If you love the taste of apple cinnamon (and who doesn’t!), then look no further than these mouthwatering cinnamon rolls with apple pie filling!

It’s great for a party, potluck or special occasion like Mother’s Day. But we love to just make it for a casual breakfast or brunch when we need to feed a crowd. It’s always a hit!

This recipe is also a great way to use up lots of cinnamon rolls, especially if they’re a bit hard or stale.

There are many options for dressing up canned cinnamon rolls. Before baking, you can unroll the dough and insert new flavors such as nuts, spices, chunks of apple, cranberries or even chocolate chips!

How Do You Doctor Up Cinnamon Rolls?

When you’re tired of plain cinnamon rolls or have leftovers or stale ones in need of rejuvenation, there are several options. Try chopping them into pieces and then adding some liquid to moisten them up.

Here we are combining with apple pie filling and drizzling a homemade custard on top. Next, we add some chopped nuts and bake until puffy and golden. The best doctored up cinnamon rolls!

Here’s what you will need to make it:

Start by cutting the cinnamon roll dough into 1-inch pieces on a cutting board. Then add them to a greased 13×9 inch pan:

Next you want to dress us the cinnamon rolls by making the custard sauce. Whisk eggs, cream, flour, cinnamon, nutmeg and vanilla together in a bowl. Then pour is evenly across the dough:

Last but not least, it’s time to add the toppings! We’re starting with spooning apple pie filling over top. Then we mix the brown sugar, butter, flour and chopped nuts into a coarse mixture to distribute evenly as the crumb across the top:

This quick video tutorial shows how to make it:

This dish is best served warm out of the pan. Cinnamon rolls usually come with icing, which you can drizzle on top if you like. However, I usually prefer whipped cream or ice cream. 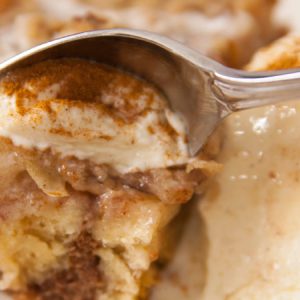