Cinnamon Roll Apple Rose Tart is a beautiful dessert to wow your guests at parties and holiday celebrations. It’s a delicious combination of fresh apples and cinnamon rolls with only 5 ingredients!

This stunning Cinnamon Roll Apple Rose Tart is absolutely one of my favorite desserts. You won’t believe how amazing the apple rose looks and tastes! It’s perfect for Thanksgiving, Christmas or any special occasion.

While it can look complicated at first, it’s far easier than making apple pie. You only need 5 basic ingredients: cinnamon roll dough, red apples, lemon juice, brown sugar and butter. After 20 minutes of prep, the oven does the rest! 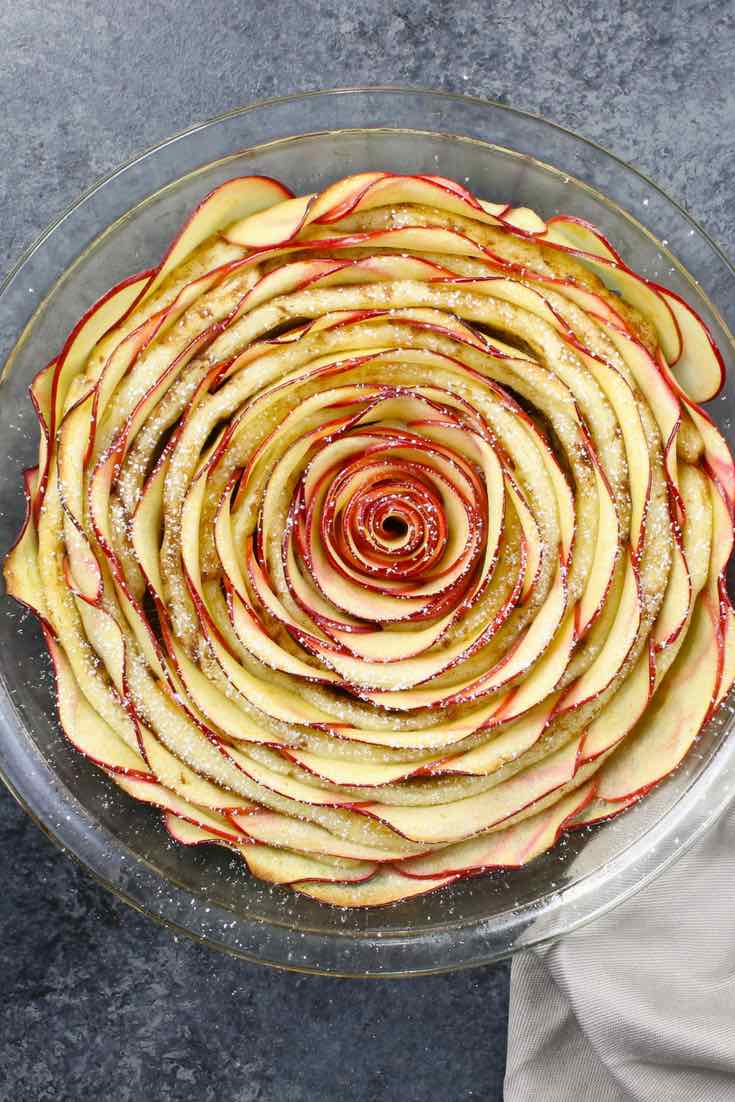 Apples for an apple rose tart

Before you start cooking, try to pick the best apple possible. For this recipe, my preference is medium-large size Red Delicious apples, which are available year-round in most supermarkets.

They lend a bright red color to the apple rose, while being sturdy enough to hold their shape. There are other more flavorful varieties like Honeycrisp or Fuji, but the color often pales after cooking. 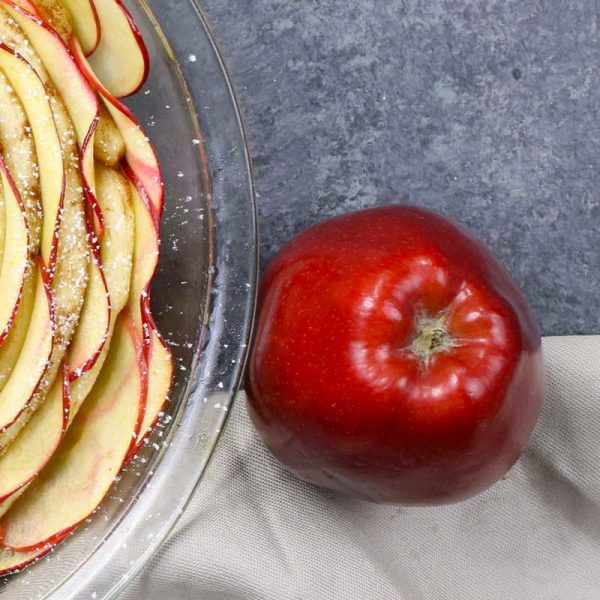 How to prevent browning when making an apple rose

Since making apple roses means making thin slices of apple, there are a few hacks to prevent them from browning during preparation.

Traditionally fresh lemon juice is squeezed onto the slices, sometimes with water as well. While this approach is easy enough and works just fine, it can impact a sour taste to the apples. 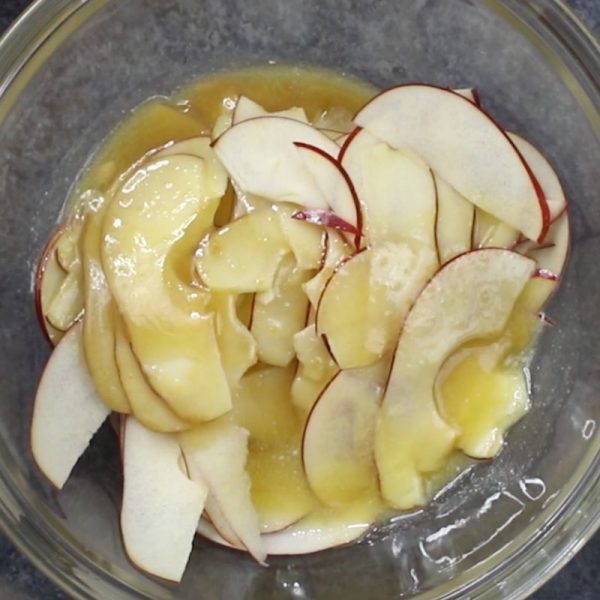 Our preferred approach is to use lemon juice combined with brown sugar and melted butter. Adding this mixture prevents browning and adds flavor.

How to make pliable apple slices for an apple rose

After coring, the apples should be sliced to about 1/8″ thickness. A mandolin can be helpful for this task, but failing that a sharp paring knife will do the job just fine.

Once you’ve coated the apple slices with the brown sugar mixture, they need to go into the microwave for 2 minutes to become pliable. Alternatively you can put them in a pot over low heat for 5 minutes to achieve a similar effect. 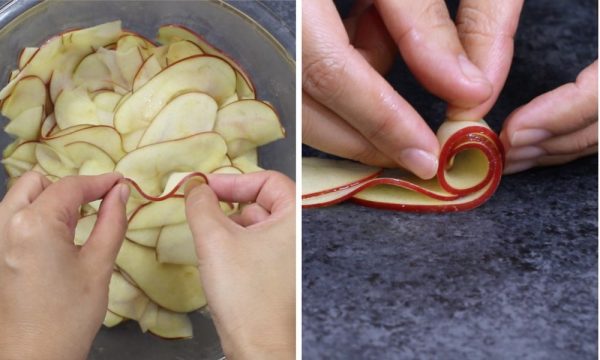 How to make apple roses

To make an apple rose, first arrange about 8 apple slices in a straight row with an inch of overlap on each. Starting with one end, gently roll the slices together with your fingertips: 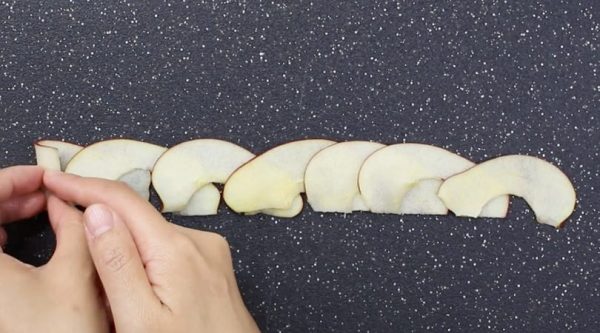 You can layer on more slices around the outside if you want to create a bigger rose. In this recipe, the bigger the rose, the more beautiful the dessert. 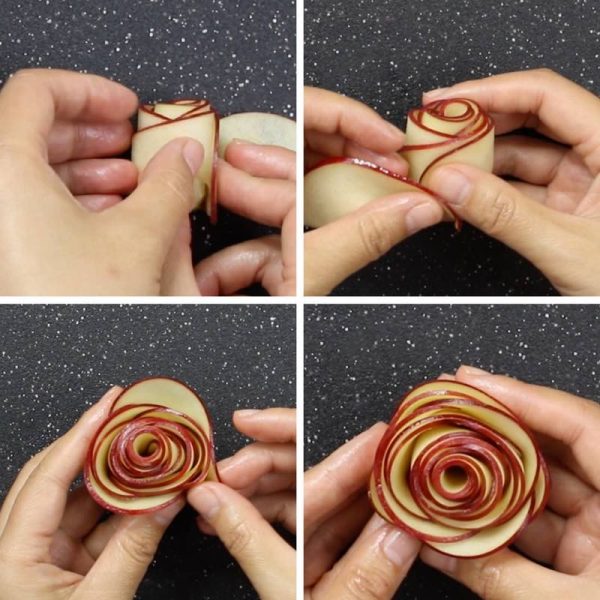 Once you’ve made the rose, it should hold itself together. If you’ve arranged the cinnamon roll in the pan already, then you can insert the rose into the middle.

How to make a cinnamon roll spiral

This is it – the final assembly before baking! Grab a 9-10 inch pie plate or cake pan along with a package of refrigerated cinnamon roll dough. It’s basically a process of unravelling a few cinnamon rolls in a spiral pattern in a pie plate. 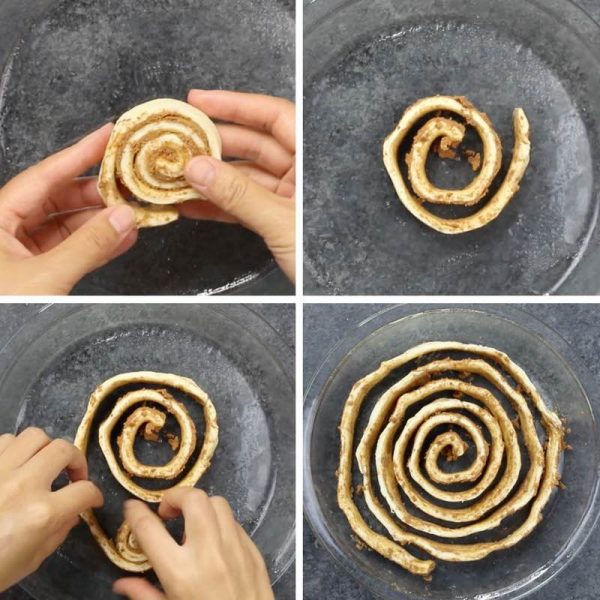 Once you have a spiral, simply insert apple slices in between and pull the dough slightly to tighten it up. It may look challenging, but it’s actually pretty straightforward. 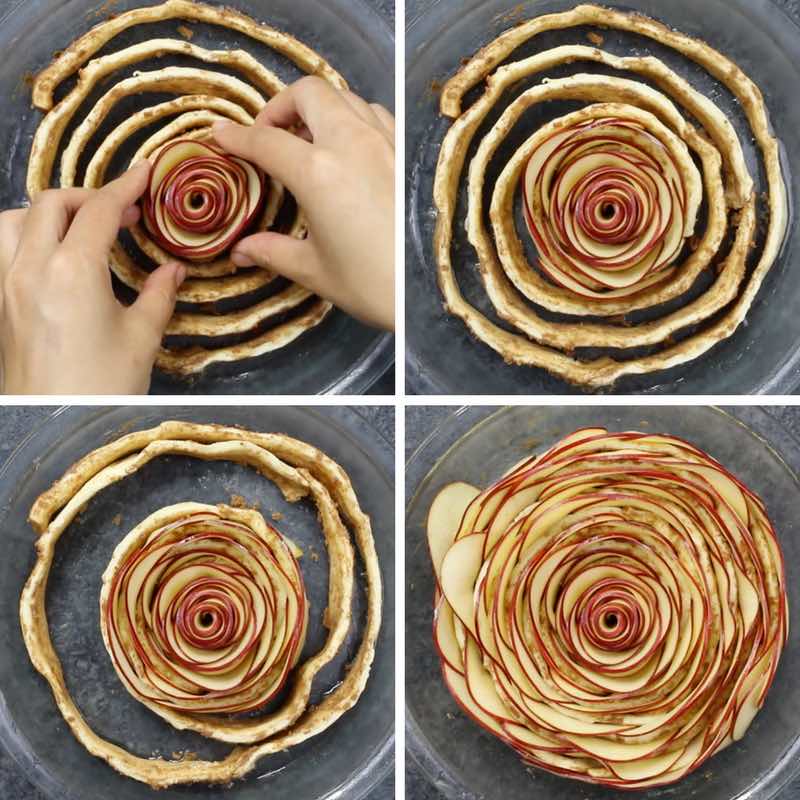 And don’t worry about any imperfections because the dough puffs up during baking to fill in any gaps or wobbles! 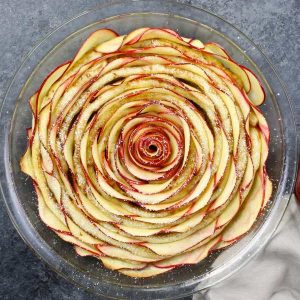