The Golden Kiwi is a modern cultivar with smooth skin and a sweeter taste than other varieties. Learn about its health benefits and how to cut it easily. You can eat this yellow kiwi with the skin on for a snack, or peel it to make smoothies, fruit salads or desserts!

If you’re like me, it probably took you a few passes in the produce aisle before getting curious about golden kiwis. While they may look similar to regular kiwi fruit, there’s a good reason that grocers stock them! So keep reading on to find out more…

What is Golden Kiwi?

Golden kiwi, also called yellow kiwi or actinidia chinensis, is a fruiting vine native to China where it’s known as the Chinese gooseberry. One of about 60 varieties of kiwifruit, this climbing plant features sweet flesh and smooth skin.

The Zespri SunGold the most common cultivar with over 10,000 acres farmed worldwide. New Zealand is a top growing region with a season running from May through November, while Italy produces another harvest for nearly year-round coverage.

When compared to the common green variety, golden kiwis have smoother skin with sweeter, lighter-colored flesh. Here’s a quick comparison of the similarities and differences:

While it really boils down to personal preference, some people feel golden kiwis taste better despite their rather pale color. Plus, they’re the only variety available without fuzzy or hairy skin!

A typical golden kiwi has about 42 calories and similar nutrition as other kiwis:

In addition, other benefits are believed to include anti-inflammatory effects, improved sleep and kidney stone prevention.

There are 11 grams of net carbs per 100 gram serving, or roughly 8 grams per kiwi. That means golden kiwis are only suitable for a keto diet in moderation.

When a kiwi is ripe, the surface will give slightly when pressed just like a pear or mango. Fruits that are still hard are under-ripe, while mushy or blemished fruits are usually overripe.

You can store them at room temperature for several days, and they’ll ripen naturally:

How to Cut a Golden Kiwi

You can cut a golden kiwi in much the same way as other kiwis. Start by rinsing the outside with vinegar and water. Then, cut off the knobby ends with a knife.

How to Peel a Golden Kiwi: The easiest way is to slide a paring knife in between the skin and flesh, removing the peel in strips lengthwise. You can also use a vegetable peeler, but it may remove more flesh than you want since the peel is quite thin on a golden kiwi.

You can cut the flesh into chunks or slice into rounds as you like. Cut kiwi fruit will last up to one day when stored in an airtight container in the fridge.

Can You Eat the Skin on Golden Kiwis? Many people find the fuzzy skin on green kiwis off-putting, but golden kiwis don’t have that problem. So it’s easy to eat the skin, and you’ll get the benefit of additional fiber intake too. 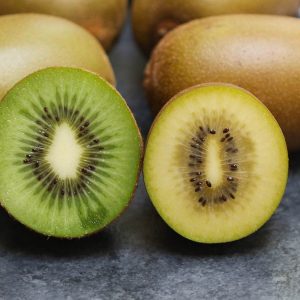 How to Eat a Golden Kiwi

A refreshing tropical fruit salad featuring golden kiwi, strawberries, mango and banana. This healthy snack or dessert is ready in 10 minutes, or you can add liquid to make it into a smoothie!
Prep Time: 10 mins
Total Time: 10 mins
Servings: 4 servings

Author: TipBuzz
Course: Snack
Cuisine: American
Keyword: how to eat kiwi
Did you make this recipe? Leave a comment below!