How to Shuck Oysters at Home

Shuck ’em, slurp ’em, fry ’em, bake or grill them! Whichever method you choose, you surely won’t be disappointed in the experience you have from start to finish when you eat oysters.

There are 5 main types of oysters depending on where you live, what’s available and your own preferences! Pacific oysters are easy to identify by their pointed shells and slightly sweet taste. Atlantic oysters are common on the East coast and Gulf of Mexico.

Other varieties include Kunamoto oysters found in warmer waters on the west coast along with the smaller Olympia oysters, also known as California or Western oysters. There are also European flats native to Brittany in France.

Do I Need to Rinse Oysters Before Shucking?

Yes, you definitely should rinse or wash your oysters thoroughly before shucking. If you picture an oyster’s underwater surroundings, you can imagine all that dirt and debris that collects on them!

Start by placing the oysters in a bowl of icy water for roughly 10 minutes. This will be sufficient to release sand and debris from the surface. Then discard the water and scrub each oyster with a hard bristle brush to dislodge any remaining dirt.

Part of the fun in enjoying oysters is shucking them, but you want to make this process as easy as possible to not detract from the whole experience. And how do you do that? With an oyster shucker of course!

An oyster knife is a simple tool featuring a thick grip and stainless steel blade to make the process easier. You can try Oxo for an inexpensive version or the Melocean for something fancier.

How to Shuck Oysters at Home with an Oyster Knife?

Always keep safety in mind when shucking an oyster at home. You are working with a pointed knife and a hard oyster, so it’s easy to slip and nick your hand.

To prevent this from happening, grab a kitchen towel and fold in half lengthwise two times. Put your thumb underneath the towel and tuck your oyster on top of the towel with the hinge facing away from you. Stick the knife tip into the back hinge and slowly wiggle it into the oyster until you feel it give slightly. Then, twist your hand to pry the oyster open a bit more. Repeat this process for the rest of the hinge.

How to Shuck Oysters without an Oyster Knife?

No oyster knife, no problem!! If you have a medium-size flathead screwdriver kicking around the house, use that instead. Just wash whatever tool you are using first to avoid any contamination.

Follow the same steps as for a shucking knife; however, you’ll need to use a paring knife to separate the muscle from the shell at the end.

How to Cook Oysters?

It’s customary to serve oysters raw with lemon wedges or some hot sauce, but cooking them is another way to go with a few different options:

How to Tell If Oysters are Fresh?

Prepare your senses! Breathe deeply and ask yourself whether the oysters smell like the sea with a mild and fresh scent. Next, they should be tightly closed and free of cracked shells. After shucking, inspect the muscle itself to make sure it’s nice and plump with a glossy appearance.

Always discard any oysters with a strong or fishy smell, cracked shells or ones that have started opening even slightly.

Is it Hard to Shuck Oysters?

Are you new to the shucking process and unsure of how much time to set aside? Well, for the newbies here you can plan on about a minute per oyster for shucking with the right tools. The hardest part is getting the knife in between two shells (the hinge), and you’ll need a bit of elbow grease too!

How to Shuck Oysters Fast?

If you don’t want to wait or put in the effort to shuck oysters, there’s an alternative approach. Bring a pot of water to a boil and add the oysters briefly. This step helps to loosen the adductor muscle, allowing some oysters to open on their own with the rest opening more easily.

Have a bowl of icy water on-hand so that you can immerse the boiled oysters to cool quickly and prevent cooking!

Can I Shuck Oysters with a Butter Knife?

For safety reasons, do not a butter knife to shuck oysters. Why? Butter knives are all metal and lack a proper grip, meaning they can easily slip when prying the shell apart and injure your hand. 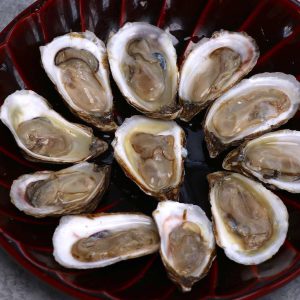 How to Shuck Oysters

Learn how to shuck oysters quickly and easily with this step-by-step guide. We also explain how to get the job done when you don't have an oyster shucking knife!
Prep Time: 10 mins
Resting Time: 10 mins
Total Time: 20 mins
Servings: 4 servings

Author: TipBuzz
Course: Appetizer
Cuisine: World
Keyword: how to shuck oysters
Did you make this recipe? Leave a comment below!

2 comments on “How to Shuck Oysters at Home”